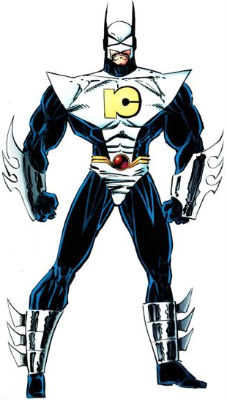 NOTE: Kill-Cat was created by Aaron Katz but was revised and modified considerably by Erik Larsen.

At the age of seventeen, young Alan Williamson went on a Safari with his parents and his dad’s business partner, Biff Brown. Together, the two partners had turned the Williamson family fortune into an even bigger fortune. Biff was treated like part of the family but young Alan never liked him – he was too handsome, smart and likeable. He never trusted Biff. When Alan’s parents walked into a trap that ended their lives, Alan accused Biff of leading them into it, convinced that he was after their money! Biff denied any wrongdoing but the distraught boy lashed out, attacking him, resulting in a struggle. The ground gave way and Alan fell in a pit and was impaled on sharp spikes and he was thought dead. The expedition party fled the area, fearing they would be blamed for murder.

When he awoke, Alan realized that he had been rescued by a primitive tribe who used mysticism and strange medical procedures to save his life. His eyes had been replaced with those of a panther and he had been infused with abilities of the jungle cat, including strength, speed, agility and a faster rate of healing. While he enjoyed his time there, Alan knew that one day he’d have to move on and return to America, in order to reclaim his birthright and avenge his parents’ death! After many years among the tribe, Alan left his adopted people and found his way back to civilization and headed for home. He stole clothes, preparing to look his part for when he confronted the murderer of his parents!

Biff Brown had grown sick over the last few years, in part because of his guilt over the death of his best friend and his family. The businessman recited a tale of epic proportions to try and convince the returned Alan of his innocence, but the young man could see through Biff’s story. He pretended to believe the man and was welcomed back into his father’s firm and he moved back into his family home.

Alan became the Dark Crusader, Kill-Cat, and fought for all of the bullied victims in the city of Detroit! He used his inheritance to fund his crime fighting exploits and aligned himself with clever lawyers and through a series of legal maneuvers; he gradually eased Biff out and forced him to invest in a shady company. As Kill-Cat, he exposed the company and after several legal proceedings, Biff was left with nothing. He was left a broken man.

The broke Biff Brown could not cope with life anymore and decided to take the coward’s way out by committing suicide. Doctors had given him only a couple of months to live, which would be weeks of intense pain. Atop a bridge, Kill-Cat confronted the man who he blamed for the death of his parents and revealed his secret identity to Biff. The man professed his innocence one last time before losing his footing and falling to his death. It was over. Kill-Cat felt that, at last, he could put his parents’ memory to rest.

Years later, fighting the super-powered criminal, Cement Man, the now extremely experienced Kill-Cat is aided by the powerful denizen of the future, Mark Osborn. The pair of heroes took down their foe and joined forces, the young man being taken under his new friend’s wing and became Kid Avenger of the Deadly Duo. The bungling team of the Deadly Duo was formed and they somehow managed to defeat a number of supervillains; the Annihilators, Gator and Man-Eater, Laff-A-Lot, Radiator, Fusion and Neutron Bob.

After a couple of years fighting crime in Detroit, the Deadly Duo was drafted in help repel a Martian invasion. They teamed with Liberty & Justice in infiltrating the aliens’ stronghold in Detroit. The group were captured but later escaped, sadly too late to prevent the repeated rape of Liberty at the hands of their captors.

When Dragon was putting together the Special Operations Strikeforce, the Kid Avenger was one of those heroes that were recruited. He served the team for a couple of years before his incompetence eventually prompted Rock to fire him. Kill-Cat had been desperate to join the S.O.S. but with his partner available once more, the Deadly Duo were reborn. The Deadly Duo were some of the heroes that agreed to aid Dragon in his failed attempt to prevent the Gods from claiming Atlantis as their new home. This mission led to a friendship between the Duo and their allies, Vanguard and Brute Force.

Detroit was largely untouched during the reign of CyberFace and the Deadly Duo remained heroes of the city. When Dragon found himself in the city, he ended up aiding Neutron Bob in defeating the Deadly Duo and robbing a bank to help finance a rebellion. The Deadly Duo had happily served the law even though it was CyberFace making the rules, later causing the pair some embarrassment.

The Deadly Duo took part in numerous superhero gatherings such as when an army of heroes took on the Vicious Circle to rescue Angel Dragon, and when Billy Berman had stolen the Mighty Man abilities. They were also some of those that Mister Glum took as his super-powered slaves when he used the God Gun to rule Earth.

When Emperor Kurr raided a Bio-Tech laboratory to steal chemicals, Neutron Bob had been dispatched to deal with him as part of his bail conditions. The Deadly Duo arrived on the scene and assumed that Bob was the villain. They aided Kurr in defeating the reformed villain but soon realised the error of their ways when Neutron Bob was disembowelled by Kurr before he teleported away with his stolen goods.

Kill-Cat and Kid Avenger later try to defeat Malcolm Dragon who they think is an imposter for Dragon. They recruit Neutron Bob, and it soon leads to a out of contol fight. Dart II also becomes part of the brawl and is knocked out where Kill-Cat takes her away to “save” her, but is later knocked out by Dart when she awakes.