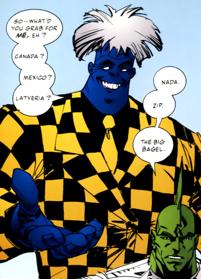 Neutron Bob made his debut fighting against the Dragon when rampaging through the city of Chicago, at the same time that the Deadly Duo arrived in town. The three heroes’ combined might proved far too much for the villain and he was soon defeated. He was sent to Stronghold Penitentiary where he was to serve out his sentence.

During the Gang War that swept through Chicago, CyberFace orchestrated a prison breakout. Neutron Bob was amongst the several dozen inmates that attempted to escape their fate. He was rendered unconscious by a blow from Dragon but it was assumed that he escaped regardless as he later took part on the assault upon Barbaric and Ricochet’s wedding, the villains all losing to the huge number of heroes present.

Years later, when Dragon found himself in Detroit after an encounter with the Gods, a bank robbery was seen to be in progress. Dragon witnessed the Deadly Duo lose to Neutron Bob and decided to get involved. When he learned that Bob intended to use the stolen money to finance a plot to overthrow CyberFace from power, Dragon opted to switch sides and join his former foe.

Neutron Bob agreed to assist the Dragon in his quest, even offering to act as a liaison to the hero as he attempted to recruit a renegade faction of the Vicious Circle. The pair travelled together back to Chicago but were briefly separated following an assault by flying saucers. Neutron Bob later returned along with the Vicious Circle, who formed a temporarily alliance with Dragon and the Underground Freaks.

Following the liberation of the planet, Neutron Bob was not incarcerated like the rest of the Vicious Circle but was instead granted permission to go free by Dragon. Since this occasion, Neutron Bob and Dragon have remained friends, leading to the former career criminal to even attend Dragon’s wedding to Jennifer Murphy a couple of years later. Neutron Bob continued to work alongside heroes and even took part on the raid upon the Billy Berman Mighty Man’s headquarters.

A brief return to crime meant that Neutron Bob was put on probation and part of his release was to serve as one of Detroit’s resident heroes. When Emperor Kurr broke into a Bio-Tech Laboratories facility, Bob was dispatched to deal with the threat. The Deadly Duo also joined the fray, taking sides with the former Dragon to defeat Bob. They realized their mistake when they held up Neutron Bob for Dragon, only to witness in horror as Kurr eviscerated the unconscious freak. Bob survived this horrendous injury after being raced to hospital for his intestines to be placed back in his torso.

He is later forced to steals weapons by the VC who hold his mom hostage. However, he turns against them and finds out that his mom knocked out Warfare, who was holding her hostage. During a fight with the Deadly Duo and Malcolm he is shot with a freak out by Dart and is negated. Neutron Bob later visits his mother who tells him that if he wants his powers back he simply needs to get a blood transfusion from her.