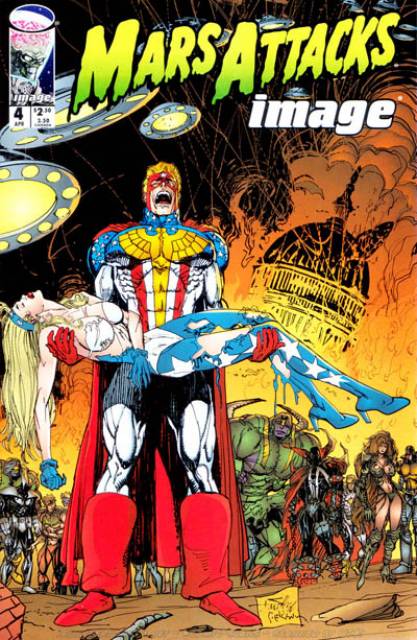 The explosion in Detroit only managed to take out the shield generator that supplies all of the flying saucers with force-fields. Further damage was halted by channeling the blast into the surrounding city, wiping out any surviving civilians. Liberty is taken away and repeatedly raped by Martians in an attempt to create a hybrid. Justice breaks free and ruthlessly slaughters all of the rapists and rescues his sister. The heroes within the stronghold then escape from the facility as it breaks up into its component parts to supply reinforcements to the losing invading forces.

SuperPatriot gives a final rallying cry to his allies as superheroes across the globe initiate a final strike against their enemies. U.S. Male is found dead by Backlash, killed while protecting the Bill of Rights. Eventually the Martians are forced to call to Mars for help but only Dragon has survived to answer their call and he warns them that they will all soon be dead.

The entire alien fleet arrives back on Mars, with little life support and fuel in their vessels, only to discover that their entire society has been wiped out by an asteroid storm and they have no resources to survive with and not enough fuel to return to Earth. Jake Farrell relieves his old friend of command over the globe’s forces and heads off to start up the clean up project. A number of heroes have been killed, including Youngblood and the Pact. The legions of dead are mourned but the human survivors celebrate their victory and thank their heroes for keeping them all alive.