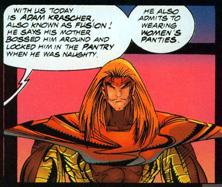 Fusion was a professional killer who was seen carrying out an assassination by a drunken Kid Avenger. He failed to apprehend the murderer but joined with Kill-Cat in tracking Fusion from their native Detroit to New York City. The villain had been hired to kill a now homeless man that lived in the alleyway protected by Spawn. The supernatural hero defeated Fusion, although the victory was claimed by the Deadly Duo.

Fusion later joins the Vicious Circle and is decapitated by Dart II after giving her bad news.