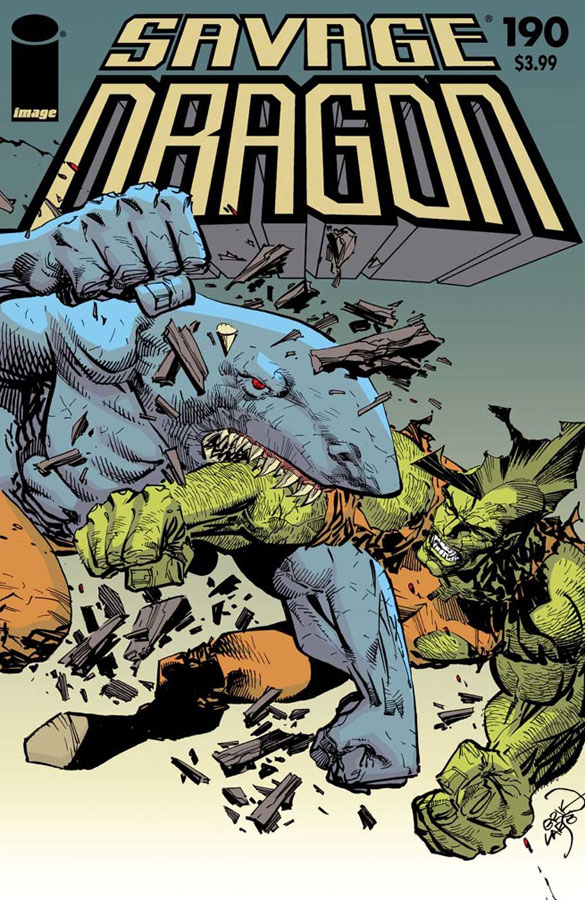 In Stronghold Penitentiary, Osgood pays a visit to the incarcerated Mako who vows to kill Dragon now that they are locked up in the same place. He still blames Dragon for the death of the original Dart a few years ago and desires revenge. Osgood wishes to avenge the death of his employer Ronald Winston Urass and although he does not have the pull that Urass did in the prison; he believes that he can set up a meeting between the two old foes.

Malcolm comes to see his father in prison who he is informed that Urass had used his wealth and influence to make himself the warden of Stronghold. He was going to use this position of power to subject Dragon to daily beatings and it was for that reason that Dragon killed him. Malcolm warns his father that killing people whilst incarcerated will not help his chances with his appeal against his conviction for mass murder. Dragon takes the opportunity to advise Malcolm against using lethal force or else he risks the same fate as himself,

The now negated Bloop and Animal return home in Baltimore to visit their mother in the Happy Hills retirement home. The pair delivers the sad news that their sister Jennifer has indeed died and with that revelation, they have opted to abandon their lives of crime as part of the Vicious Circle. They announce that they are home for good and can be a family once more.

Malcolm finally meets the parents of his girlfriend after having to reschedule several times over the past few weeks. The encounter seemed to go well but later on Maxine Jung Lai informs her boyfriend that her parents do not approve of him. The fact that Malcolm is not Chinese, two years younger than Maxine, is still in school and does not drive are all reasons for them not to approve. They also suspect that Malcolm would never marry their daughter; something he assures Maxine is not the case just that it was far too soon for that.

Outside Stronghold, Helen Black joins with Reverend Parasol and the Church of Savage Dragon in protesting for the release of Dragon. Parasol fears that their efforts will be for naught but Helen tries to give him some encouragement. Inside, Abraham Smith meets with his client to discuss his recent actions. He suggests that he not get into any more fights during the appeal process but Dragon points out that he is not starting any of these clashes, he is simply ending them.

A group of Vicious Circle thugs convene inside one of their warehouse operations where Rawdog briefs them all on being on guard from the new Dart. As loyal agents of FirePower, they have all been marked as potential targets from the deadly killer. Some of the villains scoff at the suggestion that they are in danger but Dart then reveals her presence. She proceeds to brutally slaughter all of the Vicious Circle members present in quick fashion.

Malcolm goes for a driving lesson with Mildred Darling which is interrupted when Frank calls his mother to deliver the news that Tierra has begun giving birth to their child. Laila Darling is soon born shortly before Malcolm and Mildred arrive at Hillman Hospital to see them. Frank has decided to swallow his pride and have his new family move back in with his mother so that she can help raise the baby. Malcolm seems somewhat troubled by this decision but he assures Frank that he is happy about it.

Back over at Stronghold, Mako approaches Dragon in the mess hall where he confronts his nemesis about the death of Dart all those years ago. Dragon defends his actions as he merely sought to rescue Dart from the kidnapping she suffered at the hands of Mako. The villain refuses to accept any guilt over the death and proceeds to attack Dragon. The pair becomes engulfed in a brutal fight which a number of inmates watch on intently. Mako manages to bite off both arms off of Dragon before pummelling him relentlessly. Before a final blow can be delivered, guards armed with guns linked up to the prison’s power source demand that Mako surrender. He refuses and is gunned down, leaving both he and Dragon bleeding out on the ground.

News of this battle soon reaches Osgood who is disappointed that Mako did not get to finish off the defeated Dragon. He instead opts to take matters into his own hands and dons the Dread Knight armor and declares his intentions to kill Dragon… Meanwhile in a remote snow-covered mountain, an enigmatic figure known as the Mighty One is approached in his lair by a cloaked figure. His ability to imbue superhuman abilities on people has been sought out by this person so that they can eliminate Malcolm Dragon. The Mighty One questions why someone so young would go to so much effort. His visitor is revealed to be Brenda Funk, the girlfriend of Adrian Weatherspoon, the school bully that Malcolm could not save from the Tyrraneans…

In a castle stronghold, PowerHouse and Flash Mercury fight against an army of monsters that have been created from the remains of local villagers. Their foe is Doctor Frankenstein, a mad scientist who used the corpses of the people that insulted him to forge an army of minions to serve his needs. The two heroes are unable to prevent Fever from being captured and strapped to a table where Frankenstein plans to perform experiments upon her.

One of Fever’s snake heads bites her captor and induces hallucinations in him that causes him to panic, wrongly believing that his monsters are attacking him. He accidentally causes his machinery to explode, bringing down his home on top of him and his creations. The trio of adventurers escape in time and make their way back to Flash’s car. The group are pleased that their first “hero for hire” assignment was a success and set off for their next adventure!

The Harder They Fall
3 Pages

The Deadly Duo bring down a hulking super-freak known as Ram Rod who had been tormenting a beautiful young woman. This lady is overwhelmed with gratitude and Kill-Cat is shocked to discover that she is throwing herself at him. Whilst the Kid Avenger struggles to gather up Ram Rod for delivery to the authorities, Kill-Cat has problems with his own. This is the first time that someone has reciprocated his flirting and he does not know how to react.

When the former damsel in distress fully comes on to Kill-Cat, he completely panics. The Kid Avenger accidentally drops Ram Rod who lands on top of the woman. This allows Kill-Cat to make his escape, offering to assist his partner in taking their fallen foe away. As the woman slowly regains consciousness and continues to make comments to Kill-Cat, he hurries Kid Avenger up so they can flee quicker.