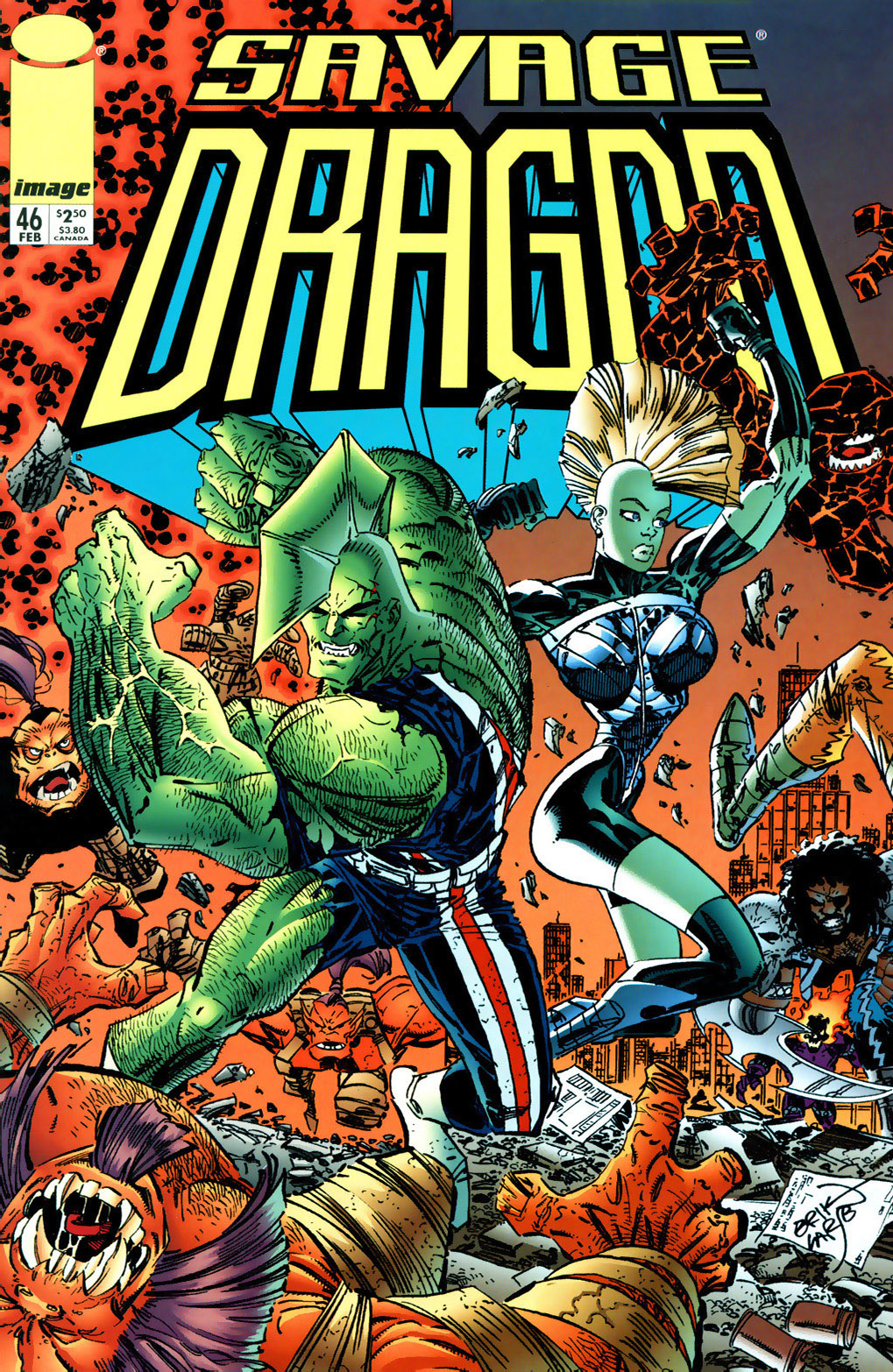 February 1998
20 Pages
NOTE: This issue features a profile for SUPERPATRIOT

Dragon declares that Thor will have to deal with him if he hopes to leave with Smasher as his latest conquest. Thor is amused by the bravado in his mortal opponent but welcomes the challenge nonetheless and strikes down his mystical hammer. A huge crevice is created which swallows up Dragon as he plummets down the opening.

Back on Earth, She-Dragon shows off some new fighting abilities and witty banter when she takes on a group of Vicious Circle members. She soon defeats them all and is actually congratulated by Howard Niseman for her victory. She-Dragon then horrifies her partner by kissing him directly on the mouth before bouncing off with excitement over to her several of her colleagues. Chris Robinson had been working with She-Dragon to help her improve and he nearly lets his greatest secret slip out.

Chris decides that he has lied enough and he confesses to Alex Wilde that he used to fight crime under the guise of the vigilante Star. Alex does not take this news at all well and she punches her boyfriend in the face before announcing that their relationship is over. She can no longer trust him after he kept that secret from her for over a year.

As several of the Gods make off with the lifeless form of Debbie Harris, Thor looks over the crevice that he created to confirm his elimination of Dragon. Thor is instead gripped from below by Dragon’s legs and is then thrown down into the depths himself. Dragon comes under siege by an army of Gods looking to avenge their leader’s defeat but he is soon joined by a recovered Smasher and Herakles. As they fight on, Thor climbs back to the surface only to be struck back down again.

As the Gods finally overwhelm their outnumbered opponents a huge flash of light erupts outward and Herakles announces that the tide has turned. He and his new allies are saved by the appearance of the AllGod, the physical manifestation of all of the Elder Gods. This powerful entity speaks of the vow of non-interference in mortal affairs that the Gods took many centuries ago. They had given mortals the secret of forging iron which led to humanity waging a war against them. AllGod has now come to insure that Thor’s plans cannot become reality and claims a newly restored Debbie Harris as one of them. She now wields a set of huge wings and is fully healed from her various injuries. Dragon demands that she be turned over to him but AllGod ignores his pleads.

Frank Darling pays a visit to a scientist in his apartment as he continues his investigation into the origin of Dragon. This scientist is positive that Dragon is of extraterrestrial origin due to the burning field and flashing lights. Frank points out that there were no reports of strange lights and as the field was located in the middle of Chicago, there would have been no shortage of witnesses. He resigns himself to the fact that this is another dead end and departs.

Dragon and Smasher find that they have been teleported back to Earth and are now lying in another burning field, completely naked. The heroes are soon collected up and returned to the S.O.S. headquarters where Smasher is finally reunited with her daughter. Barbaric begins to panic at the sight of Dragon as he had gone against his wishes and done a merchandising deal, albeit a failed one.

Rock is pleased to see Dragon and explains that in his absence that he was boosted up to leader of the S.O.S. Their superiors did not want Dart in the role and SuperPatriot had still not fully recovered from the mental episode he suffered when Rapture was killed. Rock also confirms that he had never given up on the hope that Dragon still lived and reveals that Vanguard had been the one searching for him. The government’s top scientists had just about discovered a way to open a portal to Godworld and are disappointed not to have used it but Dragon advises them to keep their equipment ready just in case.

Horde holds a meeting with Captain Mendosa in an alleyway where he expresses his disappointment in She-Dragon becoming a threat to his operations. Mendosa points out that She-Dragon was useless when she was brought into the Chicago Police Department and that it is only through the Vicious Circle’s incompetence that she is not dead. It becomes clear that Horde and Mendosa are old friends although Mendosa is referred to by the name of Alvin. This whole conversation is secretly recorded on video by an unseen source.

Dragon is briefed on changes to the S.O.S. which includes the recent deaths of several members as well as the expulsion of Beast Boy and Feezle due to them being completely useless. A number of new recruits have been inducted onto the team and Zeek is one of them. Dragon welcomes him into the ranks before getting surprised by the apparent arrival of Star. He claims that he has nothing left for him back home and has taken up Dragon’s offer for him to join.