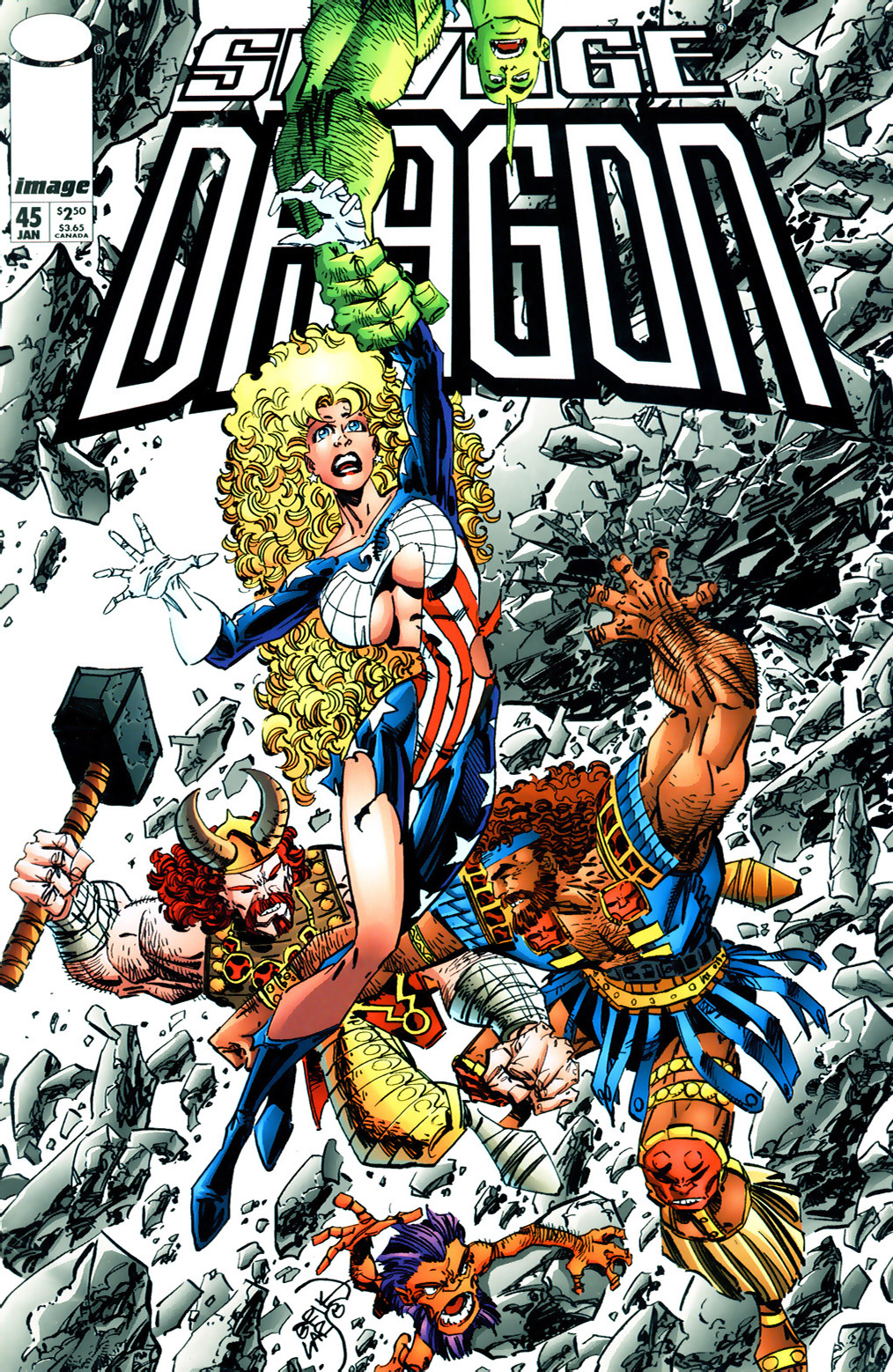 The Martian flying saucer arrives where Earth should be but instead find a strange infinity shaped planet inhabiting the location instead. Dragon comments that this planet is at least inhabitable and after four months of space travel this may have to do for a new home. Their vessel is suddenly hit by a huge boulder that leaves them crashing down to the ground. Dragon and Smasher are unhurt from the impact but Debbie Harris is left in bad shape.

Meanwhile on Earth, footage of a bank robbery is shown which featured a super-freak named Rogue Warrior getting confronted by three members of the S.O.S. As they prepared to take the criminal into custody, Kill-Cat leapt into action. Rogue Warrior fired off a blast that ripped through Crusher’s torso before he got ready to attack Kill-Cat again. The hero got out of the way but Rogue Warrior’s powerful hands ripped straight through the chests of GoldBrick and Morose. GoldBrick’s blood was revealed to be some kind of highly corrosive acid which burnt into Rogue Warrior’s arm and took him down. Kill-Cat hoped that his performance proved that he should be part of the S.O.S., oblivious to the fact that he just cost three heroes their lives. Rock ends the airing of this videotape and warns a group of unseen new recruits to always expect the unexpected and he is furious that Kill-Cat is still out there.

A gunman stalks William Jonson as he watches television but this would-be assassin is surprised when Rita Medermade smashes through a window and throws him inside. William leaps onto the professional killer and points a gun to his head. He demands to know who sent him after them and declares that he has every right to kill him so he should starting talking.

Back on the alien world, the person that had thrown the boulder tears into the wreckage of the flying saucer but Dragon punches him clear. He seeks to press his advantage but soon finds himself surrounded by a horde of strange super-powered beings. They take his group back to their city where it becomes clear they have landed on a world populated by Gods. Debbie is taken to be treated and it is stated by Golden-Boy that she will soon be in perfect condition again. The Gods are determined to return to Earth as their elders have exiled them from their own realms but also forbid them from going to Earth. Dragon points out that his home world does not even exist in this reality anymore but a passage there is still possible according to the Gods’ leader, Thor.

Thor announces his intentions to lead his companions to Earth after centuries away from the planet. He hopes to demonstrate to these young gods that they truly are magnificent and that mortals are beneath them in every way. He is disgusted that the Gods have been herded onto Godworld like cattle and looks forward to enjoying himself on Earth. Thor then notices Smasher and looks to enjoy having sex with a mortal woman once more. Dragon attempts to defend his teammate but is punched out through a wall, landing at the feet of another new arrival.

The Elder Gods had learned of Thor’s plans and have dispatched an agent to prevent the Gods from carrying out their invasion of Earth. Herakles hopes to stop Thor before a portal from Earth is opened up to rescue Dragon, opening up a route for the Gods to seize upon. Thor and Herakles are soon engaged in a brutal fight with one another. Herakles mocks Thor’s reliance on his weapons as he fights with only his inherent strength. He also warns his opponent that Earth now has weapons and beings that could stand up to even him but this merely goes to drive Thor on, speaking to his desires to continually test himself against things.

The site of Darkworld’s destruction is searched by Vanguard and Wally after government scientists finally managed to open up a portal there. Vanguard confirms that there is absolutely no sign of life and contacts Rock to make his report. Neither is convinced yet that Dragon is dead but a portal is opened up back to Earth as the search will have to continue another time.

Rock stops by the quarters of Smasher where her daughter is being taken care of by a babysitter, Alison Summers. This youngster is the niece of Dart and she is asked by Rock to speak with Angel Murphy about her mother. Alison informs the child that the search for her mother continues and although they have not found her yet, she believes that they are getting closer.

As the duel between the two Gods continues, Dragon notices that several of the Gods are attempting to make off with the unconscious Debbie. He does his best to fend them off but Smasher’s assistance is soon needed and her impressive strength turns the tide. The two heroes gather up Debbie but as they flee, Thor and Herakles’s battle causes a building to collapse upon them. Dragon emerges from the debris and discovers a lifeless Debbie amongst the rubble. He then notices an unconscious Smasher and races to her side just as Thor takes hold of her and a similarly fallen Herakles. Thor announces his victory and he claims Smasher as his prize…