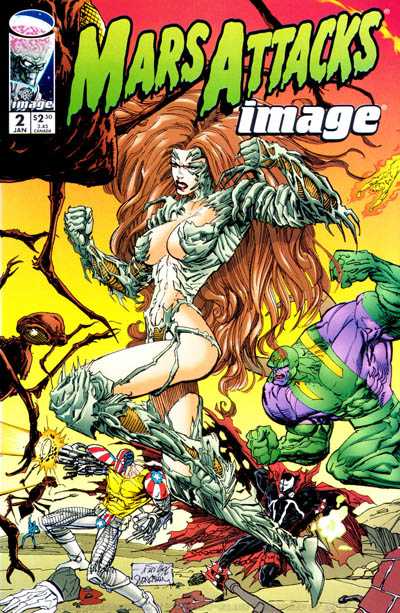 In New York City, ShadowHawk does his best to evacuate as many people as he can before either the giant ants or the alien shocktroopers slaughter them. Witchblade is directed to Times Square by the Maxx as he has seen some heroes gathered there trying to safeguard millions of civilians. Stryker hopes that his spread out teammates will be enough if a full-scale assault is staged on the area.

A Martian stronghold is set up in Detroit where The Kid Avenger reveals that he remembered that there would be an alien invasion but did not think to tell his partner, Kill-Cat, about it.

Chicago is seriously overrun with Martians due to its high freak populace which made it a prime target. Dragon and SuperPatriot meet up and protect two of their friends before deciding that they can do no more and that they will have to trust the Vicious Circle will pick up the fight while they regroup. At a mobile hospital camp, the World’s Mightiest Man cares for the injured in his alter ego, Ann Stevens. It takes a lot of convincing from her teammates to become Mighty Man and become proactive, her powers possibly being one of the few things that can save humanity…

Pin-up by Erik Larsen and I.H.O.C. (same figures as the cover to Mars Attacks Image #1)