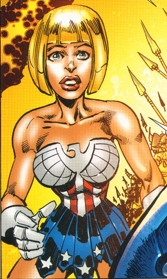 Angel Dragon was the only child of her parents, Jennifer and Kevin Murphy, who were high school sweethearts that got married young. Their wedded bliss was short-lived as Kevin’s life became something of a failure as his career was going nowhere, working for his father as an electrician. He started taking his frustration out on Jennifer but when his wife’s mutant powers emerged, he had to vent his anger on something else and targeted his daughter. Jennifer defended the infant Angel and punched the head clean off of the abusive Kevin.

Jennifer went on to fall in love with Officer Dragon after he helped her deal with the fallout from her husband’s death. Jennifer and Angel lived with the hero until life in Chicago got too dangerous, especially with Dragon becoming the primary target of CyberFace, the King of the World. The mother and daughter pairing remained hidden until long after CyberFace’s eventual defeat before eventually returning to be with the Dragon.

Dragon and Jennifer were reunited and in love once more and their marriage soon followed. Angel was initially against the wedding but soon embraced life with Dragon and was even adopted by her new step-father. This newly formed family soon got an unexpected addition when Mister Glum became stranded on Earth.

Despite Mister Glum’s constant claims to desire Dragon’s death, the family accepted him pretty much from the start. Jennifer was the only person to voice any concern and when Glum’s machination left her crippled, she vanished with her best friend Gertie Funt. Angel remained in Glum’s companionship and when her diminutive friend conquered the planet using the God Gun, she became his only trusted ally and they soon fell in love.

Angel Dragon embraced her companion’s murderous nature and was soon killing countless people herself. When Dragon destroyed the God Gun and liberated Earth, Mister Glum had little choice but to flee for his life. Angel could not bear to be separated from Glum and joined him in returning to Glum World. The couple then set about conquering planets in Dimension-X, succeeding in claiming numerous worlds in only a short amount of time.

Angel and Glum encounter WildStar who informs them that that Earth is in danger due to the threat of Kurr. Angel and Glum invade Earth, but were not prepared to having to deal with Kurr and his tactics. Kurr had killed everyone on Earth using a gas that aged everyone rapidly. Angel quickly aged and melted into the arms of Glum, and Glum in turn was beheaded by Kurr. However, thanks to Dragon traveling in time and killing Kurr before these events took place, Angel did not die and she did not invade Earth along with Glum.

Later she visits Earth with Glum using a disguise, but due to using fake money, their identities are revealed. During a scuffle with the local heroes, Angel is critically wounded by a boomerang hurled at her neck by Daredevil. Glum takes her back to Dimension-X where he encounters Rex. Rex promises to help Angel in exchange for being returned to Earth. Glum complies.

Angel and Glum soon take over a decent portion of Dimension-X with the armies they were able to amass. However, during an attack on the a planet their entire army is eaten by the Awesome Eater. They are about to start from scratch when they are attacked by Malcolm, Angel Murphy, and Rex Dexter. During the attack Rex Dexter blasts her, killing her.