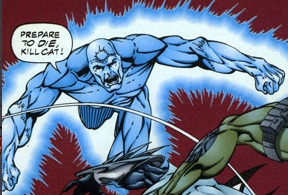 Radiator was one of Kill-Cat’s enemies in Detroit. When his foe was making a movie about his life, Radiator was enraged that he had been selected as a minor character amongst a legion of his fellow victims. He replaced the actor posing as him and proceeded to cause havoc on the movie set until the Deadly Duo eventually realised who he was. They still needed the assistance of Riptide in order to defeat their opponent. Some years later, Radiator moved over to Chicago and joined up with the Vicious Circle. He accompanied the villainous group into battle against the invading Tyrrus Combine but was killed in the opening moments, torn in half by one of the Tyrraneans.