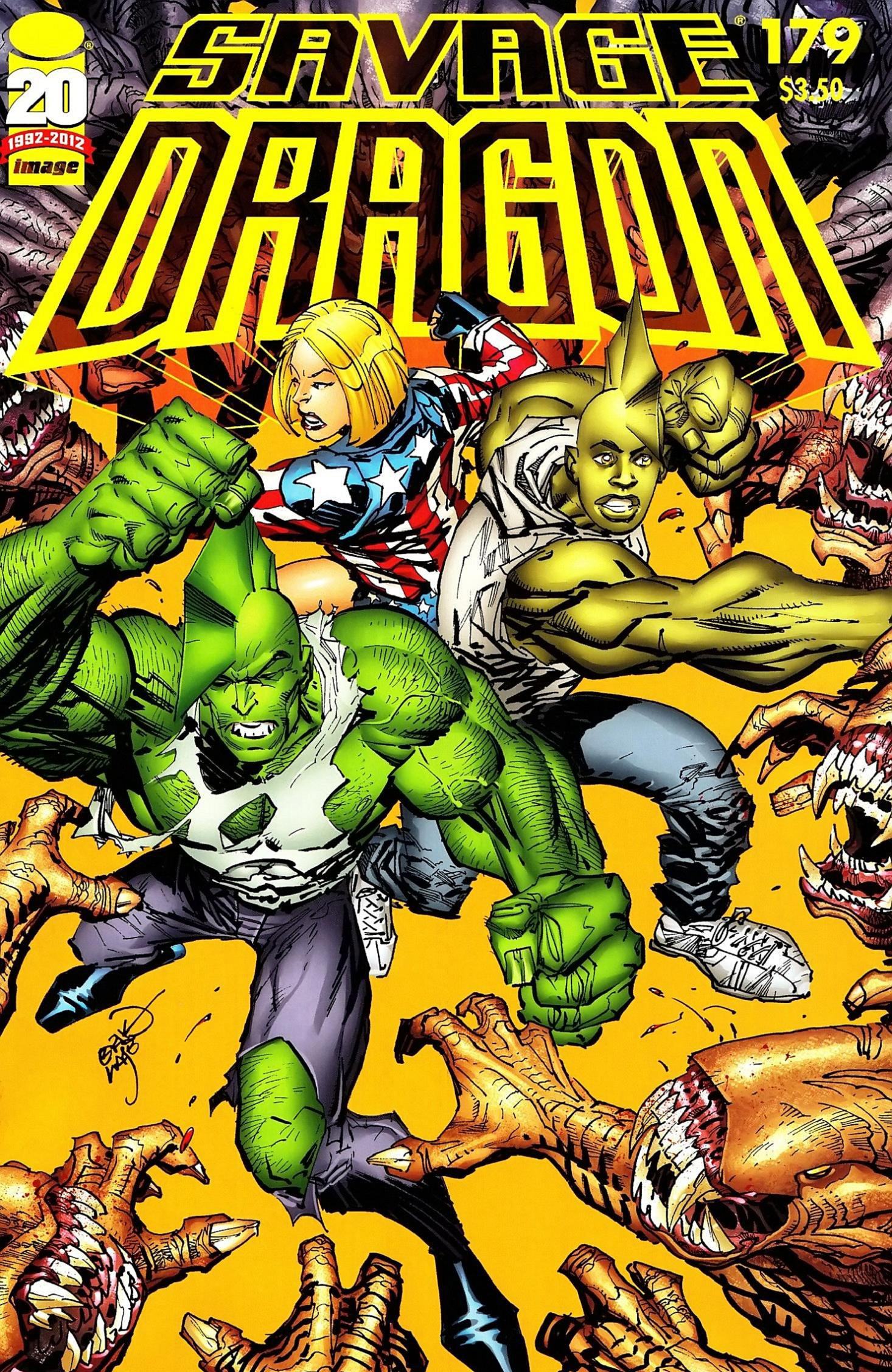 VILLAINS
The Tyrrus Combine (Some Die)
The Atlanteans
– King Garf

Vanguard places an emergency call to Dragon aboard the Krylan spaceship to inform him of the invasion currently being carried out by his people’s enemies. The Tyrrus Combine has commenced a global assault upon Earth and Dragon is asked to return home to lend aid. Dragon declares that it would take him months to return home as the Krylans are actually near Vanguard’s own home world of Kalyptus. He had hoped to speak with the Kalyptans to see if they know of a vacant planet that could serve as a new home to his people. A desperate Vanguard reveals that Kalyptus has fallen to the Tyrraneans and advises Dragon to leave immediately. Their communication is abruptly cut off and it is suggested to Dragon that they depart while they still can before death comes for them too.

Back on Earth, Malcolm Dragon and Battle Girl flee as Tyrranean vessels hover above Chicago. They note how they barely survived against a single one of the aliens and that they have no chance against an entire army of them. Malcolm is bleeding badly from their previous fight but Angel instructs him to push through his injury and carry on. They need to find a hiding place quickly or else they will be killed.

The Little Wise Guys attempt to convince Daredevil not to leap off and face down the invaders as he is hopelessly outclassed by them. The hero shrugs off their concerns and heads off into battle regardless. P.J. is concerned by his friends’ worry that Daredevil is killing himself with this move but Peewee assures him that Daredevil has done much worse and lived to talk about it. One of the Tyrraneans suddenly attacks the Little Wise Guys but they are removed from danger by the speedster Silver Streak. He races them away to find somewhere safe for them to wait out this danger away from harm.

OverLord flies over the city and realizes just how bad the situation is. He goes to confront the Vicious Circle in the hope of recruiting his former colleagues to lend their might in repelling the invaders. Brutalizer rejects the notion of helping others and notes that he is in command now and that the Vicious Circle are not heroes. OverLord points out that that does not matter if the world ends and when Brutalizer makes a move against him, he simply blasts a hole through his rival. He declares that the Vicious Circle will help stop the invasion and resumes control of the group.

Over in God Town, Herakles is shocked by the sight of so many alien vessels filling the sky above his home. The Tyrraneans then open fire upon God Town in a huge volley of firepower which prompts a swift response from Herakles. He notes that these aliens have no idea that it is the Gods which they have declared war upon and that they will soon learn the folly of their actions. Herakles then leads his allies into battle against the Tyrrus Combine.

The Krylans arrive above Kalyptus and quickly confirm Vanguard’s claims that his entire race has been butchered by the Tyrrus Combine. Krull and others question the wisdom of being so close to the planet and suggest that they flee. Dragon has no intention of leaving though and allowing the Tyrraneans to get away with genocide such as this. The debate is interrupted when the enemy aliens breach their vessel and attack. Dragon moves quickly into action and when his fists fail to defeat his foes, he relies on his skill with a firearm. Dragon opens fire upon the invaders and soon has eliminated all of the intruders.

Mako swims down into the undersea kingdom of Atlantis and meets with the current king. He informs him of the invasion currently unfolding on the surface world and requests the use of the sea monsters to help defend the planet. The king is unwilling to help and hopes that this assault will thin the herd allowing the Atlanteans to gain an advantage over humanity. Mako is shocked by this declaration as mankind are abandoned to their fate.

Around the world, superheroes such as Invincible, Spawn, Witchblade and Shadowhawk join the fray against the Tyrraneans. OverLord leads the Vicious Circle into battle and orders that they kill every single one of their foes that they come across. There is no room for mercy as the aliens begin to claim some of their lives.

The remaining members of the Special Operations Strikeforce are led into battle by SuperPatriot who relentlessly opens fire on their enemies. Buttress notes that they are up against an impossible number of opponents but SuperPatriot ignores such worries. As the fight rages on, Buttress is overwhelmed by the Tyrraneans. She is dragged down to the ground when they proceed to tear into her.

Ann Stevens and Larry Bradford find themselves fleeing for their lives from a Tyrranean as they try desperately to protect their daughter. Larry suggests that they have Betty transform into Mighty Man as at least she will be safe. Ann removes Betty’s wrist protector and has the young child turn into the World’s Mightiest Man. Betty notes that the Tyrraneans are all bad and her mother instructs her to not let any of them harm her.

Barbaric is fighting against the Tyrraneans but believes that the situation is hopeless as thousands, if not millions, are dying all around them. Ricochet cannot harm any of the aliens as she merely bounces off of their exterior. Rock calls out for them all to keep fighting as the aliens swarm around them. Meanwhile, the Deadly Duo joins forces with Dart who cuts through the Tyrraneans with her God Sword. Kill-Cat tries his best to ask Dart out on a date after the invasion but she merely replies that she would be cutting him in half if not for the aliens.

As they arrive in relative safety, Angel is horrified to discover that Malcolm has passed out from loss of blood. She uses her jacket to halt the bleeding in the hope that his healing factor will soon kick in and repair the damage. Before this can happen, one of the Tyrraneans arrives and launches an attack upon the heroine. As she is overpowered, Malcolm regains consciousness and helps fend off this assailant. With everything appearing to be completely hopeless, Angel makes a special request to Malcolm. She asks that he make love to her as she does not want to die alone and afraid… 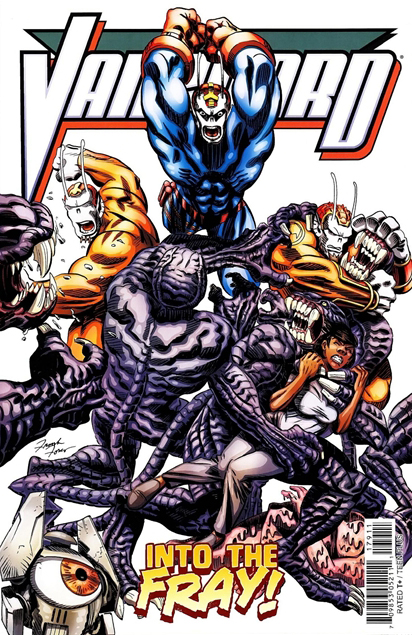 Vanguard and his fellow Kalyptans struggle against the onslaught of the invading Tyrraneans and they fear that all is lost. Vanguard is furious that Barakkus has knocked Modem unconscious as without her, they and all of Earth are doomed. He fights his way through to Lurch who is terrified of transforming into one of the Tyrraneans again. The ranks of the Tyrrus Combine suddenly find themselves thinned as reinforcements from an unexpected source arrive.

The terrifying visage of Amok is revealed as his vastly superior strength easily handles all of the Tyrraneans present. He slaughters the majority of his opponents before the survivors are left with little choice to surrender. This intervention allows Modem to recover and she explains how she used her genetics knowledge combined with her powers to repair the damage done to Amok’s brain. Amok is quick to point out to Vanguard that he only helped to save Roxanne Wells and her people, he would happily have allowed the Kalyptans to be exterminated. Vanguard reveals that that has happened already and it appears that his species outnumber his by two.

The newly established peace is interrupted as the Tyrraneans’ drone reactivates and interfaces with his counterparts on every ship within the Tyrrus Combine’s fleet. As it gains control over the starship, Wally acts by blasting the drone’s head clean off. Modem then attaches Wally in the head’s place, creating a makeshift firewall to separate their systems with that of the Tyrraneans. She then takes her leave, teleporting away from the vessel and reclaiming her freedom.

Vanguard orders his cadets to lock the captured Tyrraneans away in his stasis cells but Barakkus refuses, instead mercilessly gunning down the prisoners. He declares that they are at war and he will not risk the Tyrraneans escaping like Modem had done. The Tyrrus Combine’s huge fleet is then watched as they descend upon Earth. Vanguard decides to try and call in some help and puts in a call to Dragon aboard the Krylan starship…