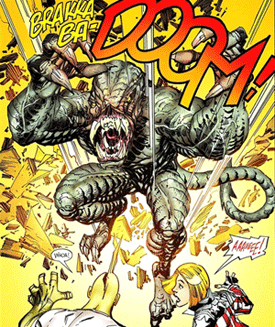 Little is currently know about the Tyrrus Combine. They are Vanguard’s enemies and are the reason that he was stationed to monitor Earth in case of an invasion by them. The Tyrrus Combine conquered Vanguard’s native planet of Kalyptus and began summoning all of their vanguard units back home for extermination. In an effort to save her brother from this fate, Kazi fled to Earth to warn Vanguard of their home planet’s fate but she was unfortunately killed by the Tyrraneans before they could be properly reunited. With a surviving Kalyptan discovered, the Tyrrus Combine sent a huge invasion force from Kalyptus to Earth to conquer this other planet. This force numbered in the millions and their global assault cost countless of innocent people their lives.

The Tyrrus Combine on Earth claimed numerous victims as heroes, villains, Gods, monsters, the military and others all banded together to try and repel the invasion. Things looked bleak until a joke suggestion made by Angel Dragon was taken seriously by Rex Dexter about recruiting God. The scientist somehow managed to get hold of AllGod, the physical manifestion of the Elder Gods, and he appeared on Earth to abruptly end the conflict. His vast energies wiped out almost the entire Tyrranean force. The survivors fled the planet but Vanguard and his allies launched an assault of their own to wipe out every single one of them. Meanwhile, Dragon had taken his Krylan people to Kalyptus in search of aid in finding an uninhabited planet. He went against his race’s peaceful religious beliefs and used the red mist plague created by his previous persona of Emperor Kurr to exterminate the Tyrraneans on Kalyptus, clearing the world for the Krylans to claim as their own.

The Tyrraneans later seek vengeance upon the Krylans and massacre nearly every single one of them. They reclaim Kalyptus once more. However, they soon die out due to there still being traces of the gas on the planet.