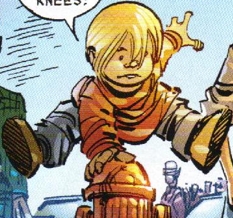 The Little Wise Guys were the schoolboy companions of World War II costumed hero Daredevil. They assisted their guardian on numerous missions over the years and it was on one of these adventures that the group were abducted by Solar Man. This hero was desperate to increase his power levels and so he captured many of his peers and locked them away in a device hidden within his Citadel of Seclusion headquarters. This chamber converted its occupants into energy that then fed Solar Man, augmenting his abilities.

Later, Jock one of the Little Wise is brutally murdered by Dart and the rest of the Wise are kidnapped. However, they are quickly saved by Daredevil. A bit later, P.J whose parents die due to a super freak attack joins the Little Wise Guys and takes Jock’s spot. It is soon discovered that all the Little Wise Guys do no age from a blood test done on Peewee. Peewee does a blood pact with P.J. and it is assumed that P.J. will no longer age as well.