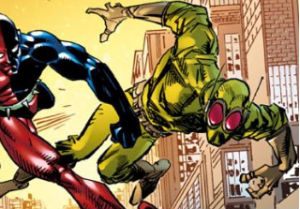 Bugeye was once a member of the Rats, the tribe of freaks that had gained powers from the Creator when Chicago was in a devastated state. Once the Rats had been all but wiped out by a mentally unstable Red Giant, Bugeye gained membership with the Vicious Circle. He was the person that ultimately made off with a vial of Dragon’s blood when the Vicious Circle raided Hillman Hospital. They later die during a large scale battle where the building they are in collapses on them.