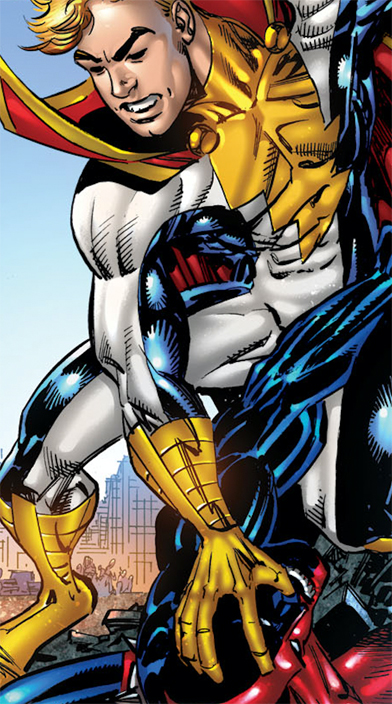 Place of Birth: Chicago, Illinois
Base of Operations: Chicago, Illinois
Other Distinguishing Features: N/A
Marital Status: Single
Known Relatives: Ann Stevens (mother), Dr. Larry Bradford (father)
Powers: When Betty Bradford slams her wrists together, a bright light is emitted, within which her body is transformed into the body of MightyMan. However, while her body changes from one form to another, her consciousness remains and is in control of the Mighty Man form. The Mighty Man entity has no mind or will of its own. The act of transforming into Mighty Man or Betty Bradford sends the inactive body to another dimension – Betty’s form is replaced by Mighty Man’s, and vice-versa. Even though inactive, Betty’s body needs nutrition regularly in order for her and the Mighty Man identity to survive. Mighty Man has vast super-human strength. He can fly at incredible speeds, has seemingly impenetrable skin, inhuman stamina and endurance, and an accelerated healing ability. He is capable of lifting (pressing) 150 tons.

Ann Stevens was the second person to fight crime in the guise of Mighty Man. When she became pregnant, Ann opted not to transform in Mighty Man again for fear of harming her unborn child. In a surprising twist, after Betty Bradford was born, the Mighty Man abilities were passed along to Betty whilst she was still in her mother’s womb. Betty unknowingly triggered the transformation and her infant mind became frightened and confused. She flailed around in the city, destroying parts of Chicago and knocking out Daredevil before Malcolm and Angel Dragon arrived on the scene. Ann caught up with the siblings and revealed that Mighty Man is actually her daughter and that the powers must have somehow transferred to her during the pregnancy. With Ann’s career as a superhero at an end, she set about creating some kind of wristbands to prevent Betty from undergoing another transformation before she is capable of acting as MightyMan.

When the Tyrrus Combine launched their global invasion upon the Earth, Ann Stevens and Larry Bradford struggled to avoid the merciless aliens. They reluctantly allowed Betty to transform into Mighty Man in the hope that it would keep her safe and possibly save their own lives. Although she had no real idea what she was doing, the sheer power of the Mighty Man entity allowed Betty to fend off the aliens by flailing around.

Betty was later trained by SuperPatriot, Barbaric, & Ricochet to help harness her powers. She joined the group when they fought the Battlin’ Bulldogs. Later, when the Earth was attacked by aliens, Betty came to help fight them off. She later broke away from the SOS to join a new Freak Force.