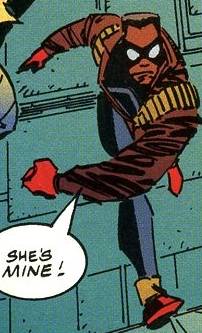 When the Special Operations Strikeforce opened up a branch in Chicago, the speedster Race was assigned to that precinct. He formed part of the field team that Dragon would lead into battle until he retired from the team. Race then came under the command of Sgt. Marvel and took part in the mission to the Dark-Lands to rescue She-Dragon from the clutches of DarkLord and his forces.

The S.O.S. fell apart during the reign of CyberFace but after his removal from power, the team was reformed in Washington, DC. Race once more became an active member of the group and assisted in missions that involved rampaging monsters, the Vicious Circle, the Gods, Imposter and the Nuclear Man.

When the government attempted to abduct Emperor Kurr and restore him to his Dragon persona, the S.O.S. teleported their target into their headquarters. Kurr gunned down many of the heroes present but Race’s quickness allowed him to avoid the shots. He unleashed numerous punches at Kurr but the blows had no affect. Race was caught by a single punch which left him unconscious. Kurr then proceeded to pummel all of the members into pieces but Race managed to survive this massacre. The S.O.S. later went to stop the global invasion of Earth by the Tyrrus Combine but they were soon swarmed over by the aliens. SuperPatriot was the sole survivor of this encounter and Race was left dead at the hands of the aliens.