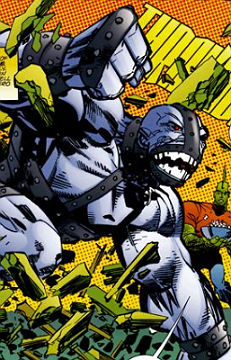 Shortly after Dragon was touched by Negate, no ill effects had really been felt by the hero. His wife had been left powerless but he appeared to be still at full strength and when the Brutalizer smashed his way into their family home, Dragon took the fight to the villain. The villain had been sent by the Vicious Circle to let Dragon know that the organisation still existed after he led an army of heroes to take down SkullFace and his new look version of the group.

Some time later, the Vicious Circle had temporarily been reformed from their criminal ways under the leadership of OverLord III. The career criminals eventually rebelled against their leader, returning to their villainous ways. Brutalizer took advantage of this situation by seizing control of the Vicious Circle through sheer power. When the Tyrrus Combine launched their global assault upon the Earth, OverLord sought out the assistance of his former allies in the Vicious Circle. Brutalizer refused to assist in repelling the invasion and so OverLord simply killed him and retook control of the group.