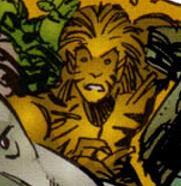 Razz first emerged as one of the many new members of the Vicious Circle that debuted during the Gang War. He spent this conflict in the Freak Outpost bar but years later he took part in a field mission. Razz accompanied a small unit that was dispatched by Horde to eliminate CyberFace and his rival Vicious Circle group. Some years later, Razz was part of a Vicious Circle group led into battle by OverLord III to repel the invading Tyrrus Combine. He was one of the first killed when a Tyrranean ripped him in half.