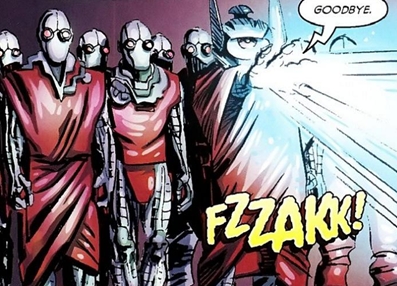 NOTE: The Mekka-Drones are owned by Gary S. Carlson.

The Mekka Drones are drones that are used The Tyrrus Combine to pilot their ships as well as take control of ships that belong to the enemy.

One is actually able to take control of Vanguard’s ship and is able to bring aboard a large number of the Tyrraneans. This drone is eventually destroyed by Wally who takes over its body.
Nearly all of these servant drones are destroyed in the Tyrraneans invasion of Earth.