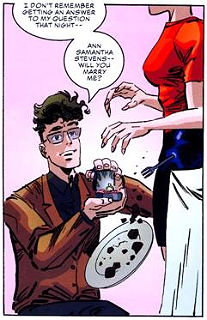 Larry Bradford was the childhood sweetheart of Ann Stevens, the couple having a playful relationship throughout medical school. Larry would routinely propose to his girlfriend, in fact, during every single one of their dates. As part of her career, Ann moved to Chicago to take up a position at Hillman Hospital. This effectively ended the relationship between the pair but they remained very close.

Following the invasion of Mars and the subsequent conquest of Earth by CyberFace, Ann fled from the devastated Chicago back home to Kansas City. Larry and Ann were reunited and eventually became a couple again. He finally got a proposal accepted by Ann and the two were eventually married. Ann gave birth to the happy couple’s first child, Betty Bradford. Larry is later seen when he gives Angel an abortion.

Larry is next seen giving Battle Dragon a blood transfusion with Malcolm’s blood. Malcolm later visits him in hopes of finding a cure for Maxine’s dads cancer, but Larry is unable to provide a solution that could ultimately help.

He later explodes after taking a dose of Malcolm Dragon’s blood.