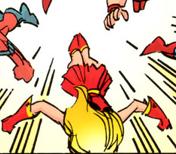 Maxi-Lass was but one of many slaves of Mister Glum when he ruled the world thanks to the God Gun. She served as one of his superhuman army that was unleashed upon the Atlanteans when they attempted an invasion of the surface, led by Mako. Some time later, Maxi-Lass was recruited into the government’s S.O.S. after their ranks had been thinned during a battle with Emperor Kurr. SuperPatriot led this team of heroes into battle against the invading Tyrrus Combine but the aliens swarmed over them, tearing many of them apart. Maxi-Lass was amongst the casualties.