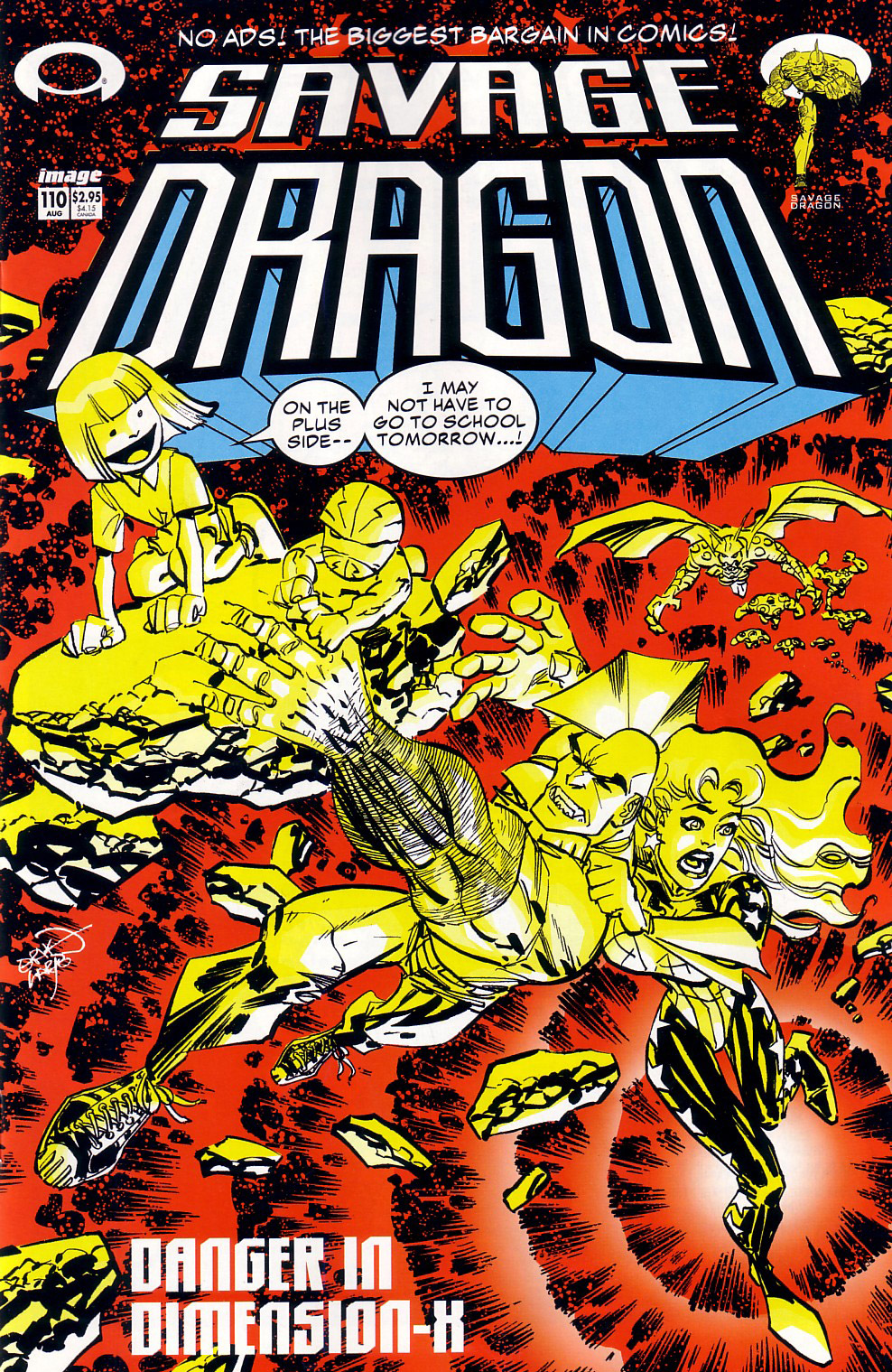 Jennifer Dragon is worried about her husband as he drifts along unconscious in the Void and Angel begs for him to wake up. Mister Glum has every confidence that Dragon will wake up perfectly fine as he has learned, to his frustration, that nothing seems to keep him down for long. Dragon does indeed soon wake up and tries to figure out the identity of the Lummox. Jennifer points out that it must be Ben Blank as there really is no other suspect.

The Lummox surveys the damage he has caused and eagerly awaits the invasion that he has been sent to prepare for. He had been sent to Earth as a sleeper agent under the guise of amnesiac Ben Blank and has been biding his time, waiting for an exact moment to carry out his mission. The Lummox is confident that there is no one left who can stop him even as Alex Wilde awakens in the house above. She grows concerned that her friends have not returned from the basement laboratory but suits up as Battle Tank and heads down to investigate regardless.

Angel begins to panic over being lost in the Void, which is named as Dimension-X by Glum. She had no idea that her parents could be defeated and wishes to go home immediately. Dragon notes that there is at least a breathable atmosphere and that he can use his leaping ability to slowly move them across the landscape. Angel points out that a nearby planet looks remarkably similar to Glum’s head but he assures her that it is merely a strange coincidence.

The stranded family witness a huge army passing them on their way towards the entrance to Earth. Deathseed leads his forces and Dragon recognizes that the Absorbanoids are part of this legion. Jennifer forbids him from getting involved as they are hopelessly outnumbered and she does not want to risk them both being killed, leaving Angel to slowly starve to death on her own. An enemy soldier stumbles across their hiding place but he is killed accidentally when Dragon punches him. He takes possession of his victim’s vehicle and uses it to fly his family in search of Rex Dexter.

As the Lummox rants to himself about his master coming to Earth, Alex arrives in the basement and demands that he back away before she unleashes the Battle Tank’s arsenal upon him. This threat holds no fear for the Lummox who is very familiar with the armor’s weapons systems and knows that his body can withstand anything dished out towards him. Alex fires anyway but this initial blast is shrugged off but the fight continues. The portal to Dimension-X is destroyed as Alex uses up all of the armor’s energy in one final, desperate shot but this too proves ineffective.

Back in Dimension-X, the stolen vehicle is stopped in its tracks by the Absorbanoids as they drain it of its power. Dragon and Jennifer attempt to fend them and begin throwing them into the pods that had previously trapped Dragon in suspended animation for a couple of years. Dragon provides a distraction for Jennifer to take Angel away whilst Glum sneaks off to Deathseed’s control room. He sabotages the facility and causes it to explode as he hides inside a protective shell.

The intensity of this explosion had been underestimated and the entire planetoid the group had drifted towards is blasted apart. Jennifer and Angel are knocked away from the area and notice that Battle Tank is now drifting in the Void, having been released from the stasis pods. Glum fears that he has accidentally killed his young friend and mourns her death. He then locates Dragon’s badly wounded body and transports him back to his home world to be presented as a trophy. Glum is horrified to discover that the entire population of his planet have been butchered at the hands of Dragon’s counterpart from Darkworld. Dark Dragon had been trapped in Dimension-X some time back and sees his duplicate being almost delivered to him as a gift… 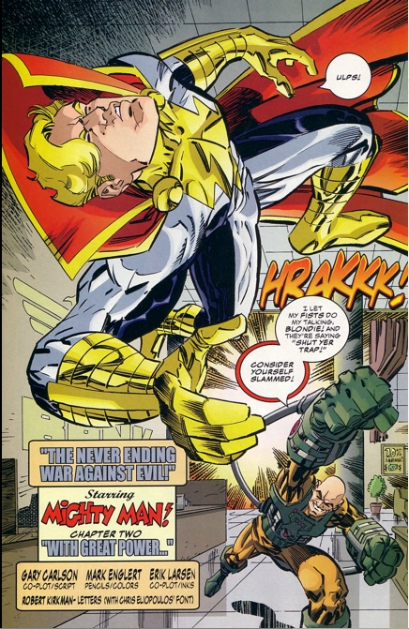 The Slammer delivers a powerful punch to Mighty Man that sends the hero flying although it does not actually cause him any harm. The hero points out that he is invulnerable so that fighting him is a useless plan, forcing the Slammer to change tactics. He dissolves the cages that had been holding his hostages before damaging the bank’s main support beam. Mighty Man is forced to hold the structure in place to protect the hostages, enabling the villain to flee with his stolen money.

Despite Mighty Man’s efforts, the support beam eventually collapses before all of the hostages have gotten to safety. He digs out these men and women and is devastated that three of them have been killed by the crushing debris. Mighty Man flies off and the police officers on the scene note that for someone who had been fighting crime for decades that he acted like a rookie when retrieving the corpses. The hero flies to Hillman Hospital and transforms back to Ann Stevens so that she can help treat the survivors. She runs into her boyfriend Larry Bradford who notes that none of the injured hostages have died and it looks as though they should all survive.

A retrospective broadcast is aired which features child reporter Bobby Berman discussing how the original Mighty Man flew to the aid of an American tank division that had been defeated. He used a Nazi tank as a bat to strike the rest of its battalion away before a giant robot dubbed Ymir-5 was unleashed. Mighty Man caught a tank shell and threw it at the robot, knocking it onto the bunker that had created it. He then dismantled the prototype machine so that it could not possibly be repaired.