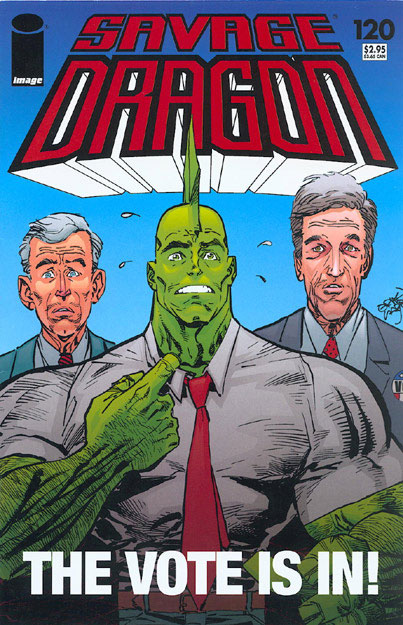 Two days before the Presidential Elections, Dragon appears before the nation’s media to publically endorse the Dragon/Urass campaign. He explains that he had not gotten involved prior to this due to being kept busy with superhero work but he is now available and fully committed. The reporters are confused by some of what Dragon says, especially when he seems to turn over all of the political matters back to Ronald Winston Urass and back off.

The press conference is disturbed when the time-displaced SoulStar arrives and attacks Dragon, blaming him for the death of his younger counterpart. The present day WildStar had been recruited by Dragon for the raid on the Vicious Circle that saw the young hero killed during the invasion. Dragon claims to have no knowledge of these accusations but SoulStar is not interested. He punches his target in the head, revealing that Dragon was in fact a robot duplicate that he destroys by smashing his head apart.

SkyLark intervenes and points out to her ally that this was not the real Dragon and that he was not responsible for WildStar’s death. She is positive that WildStar still exists somewhere and they teleport away in search of him. Urass’s ruse has been exposed in front of the whole world and he rants at the police officers that had been providing security. His own recent rant about President Bush being replaced by Imposter has now been thrown back in his face due to the Dragon robotic duplicate.

The whole affair had been witnessed by Jennifer Dragon who grows increasingly frustrated that Dragon does not seem willing to get involved personally to end the Dragon/Urass campaign. He instead takes Angel and Mister Glum out trick or treating and figures that people will figure out that he is not interested in becoming the next President of the United States.

As the trick or treating yields impressive results, a teenager steals Angel’s candy and attempts to run away with his stolen goods. Glum chases down the youth and brutally beats his head into the ground before Dragon pulls him away. He takes the youths to fill in some police reports which cause them to be late getting home to a worried Jennifer.

Jennifer explains that she has grown nervous after hearing noises coming from the basement. She is annoyed over the lack of any superhuman abilities as she could have investigated the issue herself. Rex Dexter and Horridus had gone out dancing together so it could not have been them meaning it could have been a dangerous foe. Dragon heads downstairs where he is ambushed by SoulStar who resumes his vendetta against him over the death of WildStar. SkyLark calls her ally away from Dragon and explains that a version of WildStar entered into Dimension-X from another Earth and needs their help. Dragon watches the two intruders pass through the portal before returning to his wife, assuring her that there was no real problem. Jennifer points out that Dragon’s strength and aim seems to be fading and it is assumed that his healing factor is keeping the full effect of Negate’s powers at bay.

The election finally takes place and Jennifer is annoyed that she is the only person in the household to have voted for John Kerry. Dragon continued his tradition of voting for Ralph Nader whilst Rex and Horridus selected President Bush. Alex Wilde reveals that she voted for Dragon purely because she felt that it was funny. Dragon heads off to read a bedtime story to Angel before Jennifer hands him the telephone as President Bush is calling him with some news… 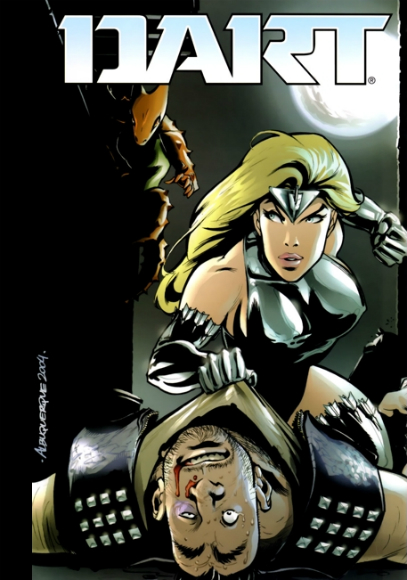 Dart finally confronts Slash, the man who had provided information to Mako which enabled him to abduct the original Dart. This ultimately led to Dart’s aunt being killed and she prepares to claim revenge upon Slash, feeling that he should have been dealt with a year ago when she last encountered him. The young heroine is about to deliver a killing blow when Horridus interrupts but she is instructed to mind her own business.

Slash receives a tremendous beating from Dart which prompts Horridus to personally intervene, leading to her being punched in the face. As the physical assault continues, the bleeding Horridus tries to stop Dart again but has some explosive darts thrown at her. They blow up behind Horridus which causes a shower of debris to bury her. She begins to crawl from the wreckage and hurls a rock at Dart, taking her off of her feet and all present pass out.
As she slowly regains consciousness, Horridus discovers that the Chicago Police Department are on hand. Slash has been killed and his body is loaded up into a body bag by the officers who then arrest Horridus for his murder. She denies the charge and declares that Dart is responsible but the real killer watches on nearby, perfectly happy for Horridus to take the fall for her crime.