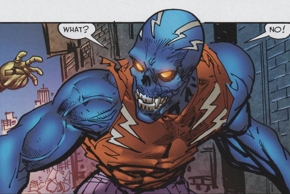 Growing up, Kevin Gorelick saw his father as a role model and desperately wanted to follow in his footsteps as formidable super-freak. SkullFace was horrified by this desire as his life was a struggle and that his life was constantly at risk due to his dangerous profession. He made Kevin promise to stick with his school work and pursue a career away from criminal enterprises.

Some time after SkullFace’s death, Kevin lost his office job when the economy caused his employer’s some hard times and those lower down the totem were let go. Kevin was let go and the fact that his supervisor used two super-powered heavies to remove him from the building hurt his feelings, seeing him only as a threat due to his appearance. Kevin received an eviction notice for his apartment and had little other choice but to approach the Vicious Circle about a position with them.

WarGod welcomed the young man into the Vicious Circle who are all saddened that SkullFace’s wish for his son to have a normal life has not come to pass. Kevin is given the code name Thunder-Head and is told about the Vicious Circle’s current plans. They hoped to assemble components to create their own version of the government’s Project: Born Again to resurrect SkullFace. Thunder-Head agreed to assist them and took part in a bank robbery to secure finances for their project, leading to Thunder-Head’s first fight where he clashed with Malcolm Dragon but made his escape before he could be arrested.

Thunder-Head and WarGod finally assemble the machine by finding all the necessary components. On a pitch black night, they activate the machine on Skullface’s grave, but are interrupted by Malcolm and Angel Dragon. During the ensuing battle Angel punches WarGod into the machine, causing the machine to explode and turning WarGod into a charred corpse. Distraught over WarGod’s death and the failed attempt at bringing his father back to life, Thunder-Head gives up in his fight with Malcolm. During the following discussion between Malcolm and Thunder-Head it is discovered that both share the same mother, albeit from different dimensions. The mother in mention was none other than Rapture. Feeling sorry for the circumstances that have brought Thunder-Head to his current standing, Malcolm allows Thunder-Head to escape in hopes that he can get his life together.

Thunder-Head is next seen visiting his father’s grave. While refecting over the recent failures in his life he is interrupted by the grave near him bursting open and a mysterious entity arising. The entity simply says, “I live..!”. It turns out that the Golden Age villain The Claw was resurrected due to a stray blast of the machine WarGod created. Thunder-Head is now forced by The Claw to work for him. During a battle with a large group, Thunder-Head warns them that their fight with the Claw is futile. He tries to escape from the Claw, but is picked up by an enlarged version of the Claw and is taken away with him.

Thunder-Head soon has had enough of the Claw and betrays him by informing Malcolm of his plans. During the Claw’s attack of Chicago he deduces that it was Thunder-Head who betrayed him and breaks his back. Malcolm later visits him in the hospital and tells him that he may never walk again. Thunder-Head, however remains optimistic.

Thunder-Head later saves Angel Murphy from an attack by Slag and the two share a few bonding moments where they talk about life, leaving their future prospects for each other open. He later loses his job due to a murder his alternate universe self committed. He later moves to Canada with Malcolm and Maxine. He later begins a relationship with Maxine’s mom Mei Ling and actually gets her pregnant. They later have a daughter.

While babysitting Malcolm and Maxine’s kids he is seriously injured by Basilisk’s penis which had come back for revenge. He later makes a sex tape with Mei.