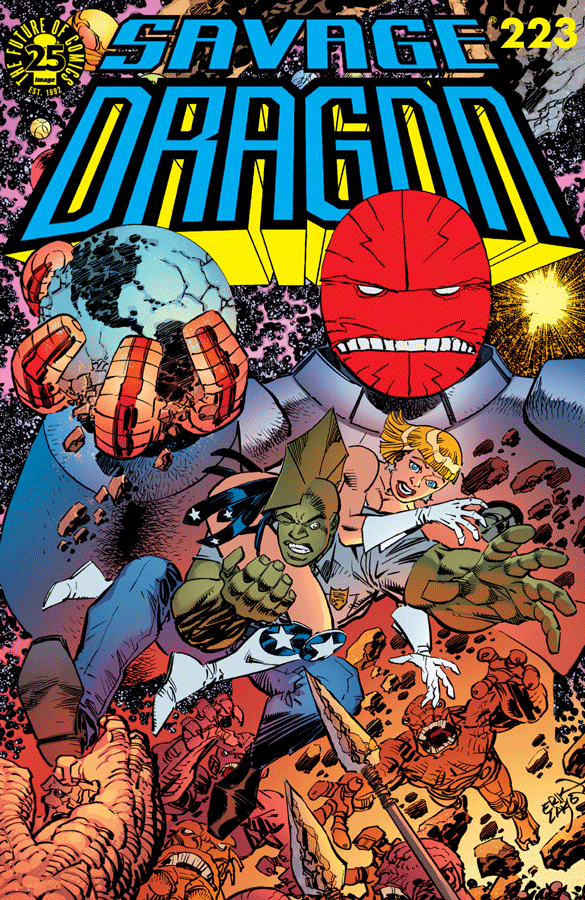 Dragon visits the facility where the Krylan race is being recreated and is shocked to discover that everything is being packed up. Lorella explains to him that the United States Government has pulled funding to the program and any support it once offered. The 163 children already birthed have been moved to a facility in France but they will likely be the last created in this manner. Lorella has become menopausal and without her eggs, there is no way to create any new infants. Dragon laments not getting to say goodbye but Lorella points out that he is not really their father. She had manipulated both of their genetic material and combined it with other DNA taken from her people to create completely unrelated children.

Jennifer is given a replicate of her old superhero costume by her daughter so that she can resume that career. Angel Murphy had hoped that Dragon would have given her mother an answer to her proposal by now as it has been several weeks but nothing yet. Jennifer is somewhat surprised that she is not a grandma already as she was roughly Angel’s age when she had her. This leads to Angel confessing to the incident that got her pregnant by Malcolm Dragon and the mother and daughter pair going to see the infant. Maxine is thrilled to meet Jennifer and proceeds to ask her inappropriate questions about her past sex life with Dragon.

Over in Dimension-X, Mister Glum notices some drones sent from Earth in search of him and wrongly suspects that Jennifer and Angel broke their promise not to inform the authorities to his location. He destroys the drones but the incident draws the attention of the alien army that had previously sought to eliminate him. Glum defends himself before being able to transport the entire fleet to Chicago to make them the problem of his enemies.

Dragon spends his time with Alex Wilde and they discuss their relationship and how things are very complicated for them. Alex never really had a second chance with Chris Robinson as he had been so different to her former lover, but Dragon is literally getting a do over with Jennifer. Dragon is still very unsure and is surprised that Alex is trying to push him to Jennifer but she hopes to minimize her pain should she once more be rejected by Dragon for her.

After spending some time with Special Operations Strikeforce, Marsha Bradly returns to Chicago to visit with Malcolm Dragon who has now come clean that he is essentially her half-brother, He wanted her story about Rapture being her mother to be confirmed before he informed her of their connection. Malcolm then takes Marsha to meet with their other half-brother, Thunder-Head. The trio enjoy their time together before news of the alien invasion hits. Thunder-Head is reluctant to get involved as he is wearing his one suit and has only just landed a new job with a law firm. Malcolm understands but asks him to check in on Maxine and the kids for him.

An assemblage of Malcolm, Dragon, Marsha, Jennifer, Battle Girl and Alex unite in battle against the aliens and are soon employing deadly force against their foes. Dragon instructs his son on how to best deal with their aerial opponents and Malcolm is soon leaping directly through the space ships. The heroes are soon joined by Mighty Man who takes over destroying the alien vessels. The sheer weight of numbers soon threatens to overwhelm the heroes. Thunder-Head reaches the apartment of the Dragon family just as the wall blasts through and threatens Maxine…

Meanwhile, Mister Glum has located the hidden stronghold of DarkLord and breaches its borders, the first person to have ever done so. He makes his way through the strange construct and notices huge walls lined with the frozen form of countless alternate versions of Jennifer Murphy. Glum eventually reaches a room that enables DarkLord to monitor various realities. He has soon configured a device capable of merging universes with the reality he is familiar with and activates it…

A new disaster is brought to the attention of Carl Cosmic and he flies up into the sky to head over to intercept and deal with the situation. He soon realizes that he is lost and has absolutely no idea of how to reach the incident to try and save the day. Carl flies up further into the sky to get a better look but goes too high and passes out due to lack of oxygen. He plummets down to the ground before eventually emerging from the resulting crater. Carl Cosmic resumes his flight before getting it wrong once more and flying back (hopefully) the correct way.