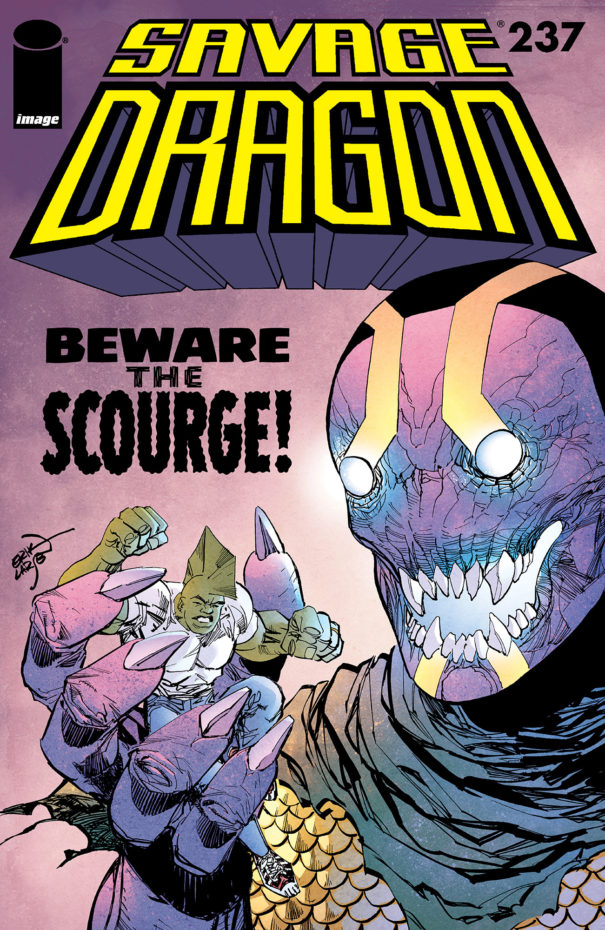 Meanwhile at Genetech Laboratories, the company’s founder Crawfish Kettlecorn is about to be ousted by his board of directors over some questionable recent decisions. The experimentation on animals that resulted in the creation of Buffalo Stu and his subsequent rampage were the last straw. Crawfish is incensed at this coup and walks away from his former employees to prepare for a new and previously unplanned future.

Malcolm and Battle Girl reach the scene soon enough and engage the new villain in battle but the Scourge swiftly proves to be a formidable foe. He shrugs off a lot of the heroes’ attacks whilst demonstrating his firepower. Before too long Angel is blasted in the face and burnt to a crisp, leaving a devastated Malcolm to swear revenge. He is blasted in half but continues the fight, damaging the Scourge’s equipment enough that he is forced to flee for his life. Malcolm is then left to mourn over his fallen partner…

Save the Future!
NOTE: This story takes place sometime prior to SAVAGE DRAGON #219
6 Pages

During one of the presidential debates of 2016, two members of the S.O.S. provide protection for the two candidates. The seemingly routine assignment explodes into chaos as time-traveler from the future teleports onto the scene. This man has come to assassinate Donald Trump before he can be elected as the fate of the world is at stake. Daredevil leaps into action to fend off this assailant and listens to more of the warnings about the future before getting knocked out.

Meanwhile, another assassin from the future teleports in but this woman has instead come to eliminate Hillary Clinton. She declares that it is this candidate that will bring ruin to the entire world and so must be killed. SuperPatriot fights with this deadly woman but is unable to gain the upper hand and is eventually shocked into unconsciousness.

This leaves both assassins to close in on their respective targets but they soon realize that the other has come to protect the one they wish to die. This leads to both assassins killing the other before either could complete their mission. Daredevil and SuperPatriot soon recover in time to witness the end of the debate, worried that no matter which one of them is elected that the world could be coming to a premature end…