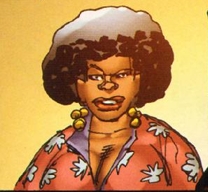 Dee Dee Jackson was the wife of Willie Jackson, the uncle of Malcolm Dragon. It was her suggestion that led Willie in going to Chicago in an attempt to get some money off of his nephew to help out with their finances after receiving an eviction notice.