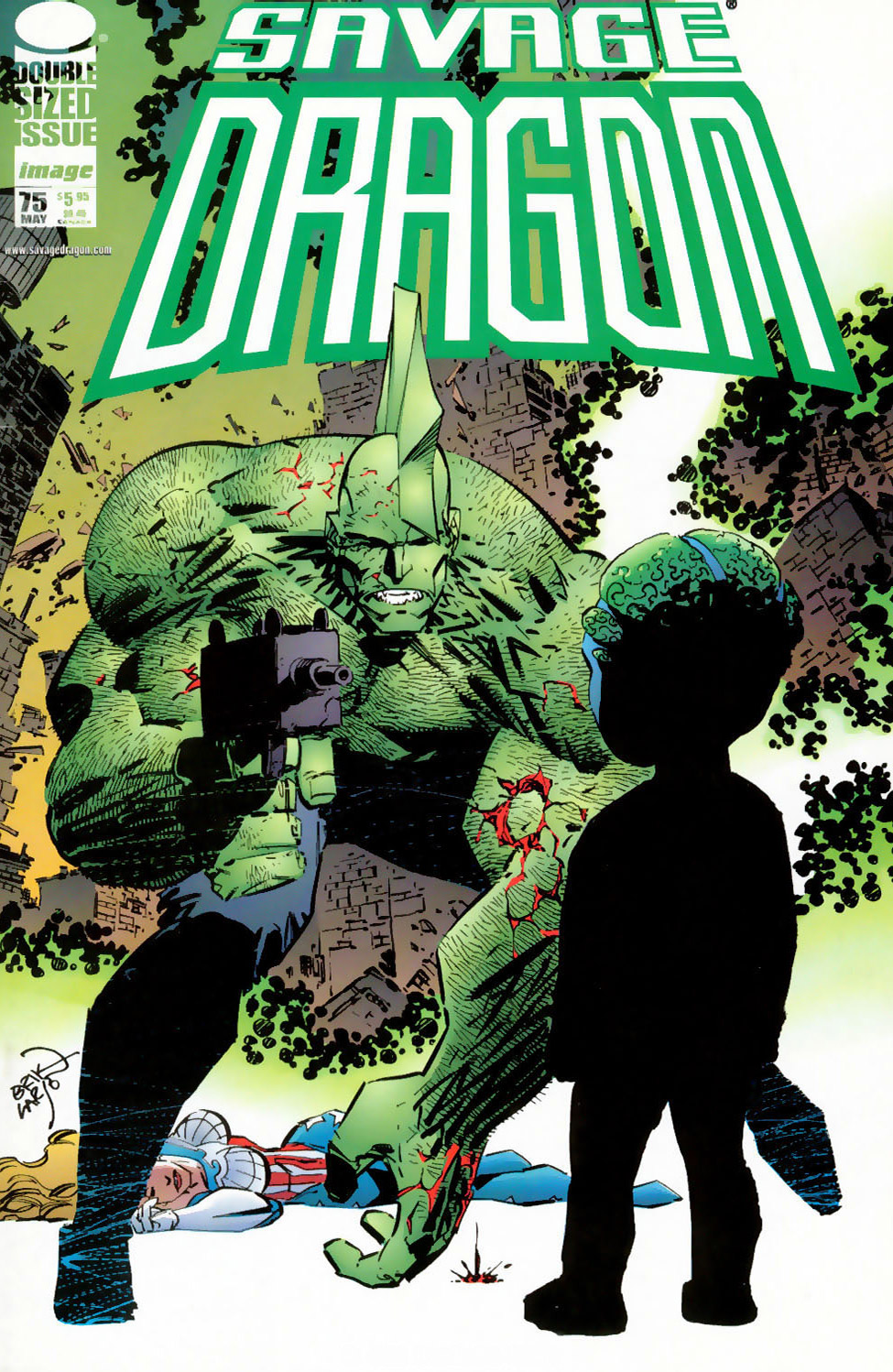 The Nega-Bomb detonates and a wave of energy is unleashed, travelling at light speed and has soon engulfed the entire planet. This explosive device is fuelled by the super-powered fetus Baby Boom and enhanced by Negate’s abilities. The shockwaves of the blast removes the powers of almost all of the S.O.S. members present, rendering the team inert in an instant. The Vicious Circle is decimated as all members with enhanced abilities are returned to their natural state.

Above the Earth on Vanguard’s spaceship, Brute Force and the Deadly Duo are spared the effects of the Nega-Bomb. The media reports on this global phenomenon but this is not what concerns Kill-Cat, he is simply annoyed that the premiere of his movie, starring Julius Schwartzenaggar, has been pre-empted by the news. The detonation in Chicago has left anyone on Earth that gained their powers through unnatural means returned to normal humans.

Dragon questions why such an act has been committed by Damien DarkLord who explains that he has visited the future and alternate timelines to glean an insight in what is in store for the planet. The Covenant of the Sword facility had been equipped with shields that protected its occupants from the Nega-Bomb, allowing Damien to corner the market on super-powered individuals. Dragon is told all about how Liberty gave birth to him after the Martians attacked the planet and impregnated her. Damien has been gathering a superhuman army and took pregnant women from hundreds of realities to help in this goal, hoping to build his forces through the super-powered children.

Dragon’s attention is diverted elsewhere as he notices his son is present and is shocked; having believed Malcolm had died shortly after his birth. Damien reveals how the Covenant replaced Malcolm with a decoy so that their technology could keep him alive. The organisation had been founded in the past in preparation for his coming. The pair’s conversation is interrupted when Smasher and her pregnant duplicates burst in and commence pummelling Dragon. He eventually surrenders as he cannot fight them and he figures he should at least listen to Damien’s side of things before taking action.

The man who used to be Mako arrives at the Chicago Police Department where he notes that the Vicious Circle has been destroyed by the Nega-Bomb. He wants revenge upon the Covenant for their act and will help them by providing the authorities with information. Alex Wilde promises that if he gives them something useful then Mako will definitely get his revenge.

Dragon and Smasher discuss how she was replaced by Imposter and the events that led to Darkworld’s creation, along with the machinations of DarkLord. Angel Murphy suddenly runs up to Dragon and it is revealed that Smasher’s aunt and uncle are part of the Covenant and with the assistance of a Covenant judge, they gained custody of her. This was all part of a plan for Smasher to regain custody of her child without her survival having to be revealed to the outside world.

A duplicate of Rapture has been brought over to this reality and she has been raising Malcolm as if he was her own. She is accompanied by Lightning who it is confirmed is not related to her in anyway and that the story that Imposter told when he posed as Imposter was indeed complete fiction. All of these things are meant to change Dragon’s mind about the Covenant but he cannot shake his beliefs. He suspects that DarkLord is not really trying to save humanity as he has now eliminated the superhuman community, the very people that his Martian ancestors had invaded Earth to exterminate. Damien’s mental abilities are useless against Dragon and so lies are being told to him in order to convince him through a less invasive manner but he refuses to believe anything said to him.

Damien warns Dragon that he will be killed in an instant should he move against him but a teleportation effect suddenly lights up the chamber. Vanguard brings the remaining heroes along with Alex, Mako and the last of the Vicious Circle so that they may strike back at the Covenant. Mako opens fire on Damien which ignites a massive battle between the Covenant’s army and the invading force. PowerHouse is enraged that the Vicious Circle has been taken from him and he will now return the favor by taking everything from them.

Dragon pursues Damien into another room with Smasher desperately trying to protect the youngster. They find SuperPatriot and Mighty Man restrained as prisoners of DarkLord who is displeased that his younger version led the heroes to his location. DarkLord’s eye beams are fired off to kill Smasher but before Dragon can attack him, Herakles, Zeek and Horridus arrive to assist. DarkLord’s death gaze is fired again to burn a hole through Zeek’s chest to kill him. Herakles challenges the villain but is cut off in an instant, just as Dragon makes his move. Mighty Man hurls a huge projectile that impales DarkLord through the heart, killing him.

Alex announces that they have gathered up all of the kidnapped children and are getting ready to leave. Dragon assures her that he will catch up before pursuing Damien once more, grabbing his head with his massive hands. Damien warns that should he be killed then reality as he knows it will be destroyed and all of humanity will suffer. Dragon ignores these threats and crushes the head of the evil child which leads to a change in reality, leaving Dragon and Damien’s corpse in the middle of a burning field…

O’ Deadly DarkLord!
NOTE: This story takes place in the past
9 Pages

At the Ft. Heaton Military Base an army of enemy soldiers attack the facility which is being defended by Super-Tough and his teenaged sidekick, Young-Tough. They deal with these invaders well enough but are thankful when reinforcements join them in the form of the base’s native soldiers. The heroes had been drafted in to assist the army in transporting the Nega-Bomb, a brand new government super-weapon that has become a target of evildoers.

Young-Tough is taken prisoner by the duo’s nemesis, Damien DarkLord, who has come to claim the Nega-Bomb for himself. His captive bites him, forcing Damien to loosen his grip which allows for Super-Tough to draw on inspiration from his memories of SuperPatriot and he acts, picking up a weapon discarded by one of the enemy soldiers. He has never fired a gun before but is ready to break that in order to protect Young-Tough.

Damien uses his mental abilities to take control of Super-Tough and has him point his gun to his own head. The hero is forced to fire the gun as Young-Tough drives a truck into Damien, knocking the aim slightly which leaves Super-Tough shooting his left eye out rather killing himself. The villain is led away but his minions now have a number of hostages lined up in a ditch. They begin opening fire as Super-Tough notices another figure messing around with the Nega-Bomb.

This person is revealed to be another version of Damien DarkLord but this one is not interested in fighting with Super-Tough. He simply activates the Nega-Bomb and the resulting explosion consumes them both. The blast tears across the area and hits a surviving hostage named Pete Davidson and when Young-Tough peers out of the ditch to check on his partner, the blast burns the top half of his face.

In the aftermath, Young-Tough is visited by Dr. Plucker as his expertise in treating super-freaks causes him to be brought in to treat him. The young hero is saddened by the apparent death of Super-Tough and his depression is compounded when he receives a letter from the government’s Youngblood. He had been leaving to join Youngblood after the assignment at Ft. Heaton but now that he has become disfigured, they are no longer interested in him. Young-Tough is left utterly devastated and will he eventually become the mentally-unstable vigilante known as Mace.

Li’l DarkLord and Baby Dragon are playing when Liberty calls them for dinner, promising them that they will be having French Fries and milkshakes. This has been a recurring ruse every night with Liberty tricking them into thinking that they are having their dream dinner, only to feed them vegetables and other healthy foods. Li’l DarkLord finds this unacceptable and takes his friend with him back to the past where he hopes to destroy the eggplant before it ever comes into existence. Their plan seemingly works and the pair returns to the present. The world has been changed drastically but Liberty brings them French Fries and milkshakes for dinner so they celebrate their victory regardless.