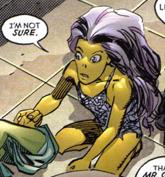 Janey’s birth occurred when the Possessor attacked the S.O.S. and held Widow as one of his many superhuman slaves. Widow entered into labour during this ordeal and the added pressure prompted Dragon to exert more strength than ever to defeat the villain. Janey was born and raised by her mother and lived with her for a few years before she was abducted by the Covenant of the Sword. She, and other children, was rescued by a number of heroes in the events that led to Dragon getting sent to another reality.

When Universo came to consume the Earth, Debbie Harris gathered up a few super-powered children to escort to safety. Janey became one of the few survivors of that world as she and her friends were thrown into Dimension-X. These children spent years adrift in this realm until finally reaching the Earth that Dragon now resided upon. Janey was soon reunited with her mother, acting as twin sister to the Janey of that world. She later moves to Toronto and starts a career as a superhero after Chicago is negated.