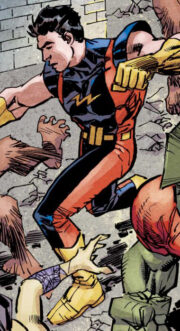 The twin offspring of William Jonson and Rita Medermade, Mark and Peter were conceived back when Dragon’s essence was trapped within William’s body. This meant that the hero had an unknown effect upon the children. They were selected for abduction by the Covenant of the Sword when they were building their army for the future, kidnapping a number of super-powered children. These kids were later liberated by a group of heroes that raided the villain group’s headquarters.

When Universo arrived on Earth to consume the planet, the Jonson Twins were amongst a small group of children that were cast into Dimension-X. They were spared the death of the world but became stranded for several years. The group finally returned home when Mister Glum was convinced to teleport them home, purely due to Angel Dragon’s pleas. The Jonson Twins were finally reunited with their parents, albeit from another reality.

The Jonson Twins are later seen attending Malcolm’s 8th grade graduation. Mark is next seen at Angel’s house warming party. Mark and his brother Peter both had superpowers kick in when they were in their late teens. Mark and Peter came up to visit the Dragons in Toronto and revealed to them that they had taken on new roles as superheroes. Mark took the name the Crusader.