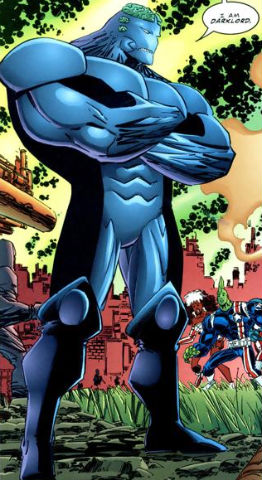 The time-traveling DarkLord begun his life as the super-intelligent powered child dubbed Damien DarkLord, sharing the same origins as his younger version. However, this version grew up to adulthood before visiting the past to prepare for his eventual birth. He formed the Covenant of the Sword organization whilst also established himself as a supervillain of the 1980s, coming into conflict with Super-Tough and Young-Tough.

It was during their final encounter that Damien DarkLord attempted to steal the original Nega-Bomb. The heroes thwarted this theft, only for another version, now just DarkLord, to arrive and detonate the weapon. This time-travel caused a divergent timeline to exist. One featured the deaths of Damien and Super-Tough, and the scarring of Young-Tough. The other had the death of Young-Tough and the survival of the other two combatants.

This divergent Earth was later visited by the Cosmic Cops who teleported the planet across the galaxy, causing massive amounts of devastation. DarkLord emerged as the sole ruler of the planet that he then dubbed Darkworld. Unfortunately, the strain of transport across space left the planet dying, dooming its entire population.

DarkLord sought to save his empire and, using the captured Eternal Youths, discovered the existence of the original Earth. He began conducting experiments where parts of Darkworld’s surface were traded with those of Earth. The intention was to eventually move over all of his followers to the parallel world.

These land transfers were detected by the Special Operations Strikeforce who dispatched a team to intervene. DarkLord killed Rapture before ultimately dying himself, caught in transit between worlds, being teleported in half as a result. Darkworld eventually blew up, killing all but a handful of survivors who had already made the transfer over to Earth.

A few years later, Rakkum joined forces with the Demon Dogs and they together abducted the Eternal Youths. A portal was open to yet another alternate reality where DarkLord emerged. He had been Celestial Engineering with his divergent selves and sought to prepare to repel an impending global disaster. DarkLord united with his younger self and the Covenant of the Sword, forging a new Nega-Bomb and preparing for the future by kidnapping super-powered youths. A group of heroes raided the Covenant stronghold where DarkLord was killed by Dart. Due to the multiversal nature of DarkLord, his true end seems unlikely.