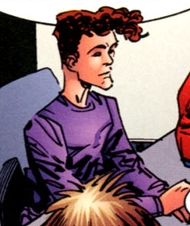 Rubber Guy was one such new member and her first mission was to accompany a number of heroes in raiding Godworld to rescue those abducted by the God Squad. He then worked with Brute Force on other missions where the team struck up a friendship with the Deadly Duo and Vanguard. Brute Force was later folded into the Special Operations Strikeforce when they went through a membership change. He later once again joins Brute Force.