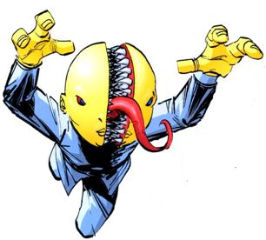 Name: OpenFace
Real Name: Mr. Brown
Former Aliases: N/A
First Appearance: Savage Dragon #12
Death Issue: Savage Dragon #161
Cause of Death: Head torn in half by Emperor Kurr
Group Affiliations: The Vicious Circle
Height: Around 5′
Weight: Unknown
Eyes: Red
Hair: N/A
Date of Birth: Unknown
Place of Birth: Unknown
Base of Operations: Chicago, Illinois
Other Distinguishing Features: OpenFace has yellow skin and a very small mouth. He also possesses a slit straight up his head which is connected to his powers. OpenFace has only two fingers and a thumb on each hand
Marital Status: Unknown
Known Relatives: Openface Jr. (son)
Powers: OpenFace has a second mouth which opens up down the middle of his head and contains rows of razor sharp teeth. This jaw possesses increased strength to allow a stronger grip.

OpenFace was a scientist within the Vicious Circle who grew frustrated with the method of leadership employed by OverLord. He set about working with his fellow scientist, Octopus, on finding a way of removing OverLord from power. The duo broke into the main warehouse of Donner Electronics in search of a device that could grant them command over CyberFace, recently resurrected by the United States government’s Project: Born Again and in a weakened mental state. Dragon confronted OpenFace and when his head was engulfed by the larger mouth of his foe, the hero bit out OpenFace’s tongue to defeat him.

A stay in Stronghold Penitentiary followed although OpenFace attempted to escape when CyberFace orchestrated a mass breakout during the Gang War. He failed to regain his freedom but he was eventually liberated by miniaturized members of the Vicious Circle. OpenFace reunited with Octopus, serving alongside PowerHouse and Baby Boom as the inner circle of CyberFace as they mounted a rebellion against Horde. CyberFace was killed by Hitler’s Brain, leading to the rebirth of both BrainiApe and OverLord.

In the reality that Dragon ended up in after his confrontation with Damien DarkLord, OpenFace had been one of those villains that refused to pledge loyalty to CyberFace. This rebel faction of the Vicious Circle joined Dragon’s rebellion against the King of the World, only for them to be apprehended by the new Liberty League.