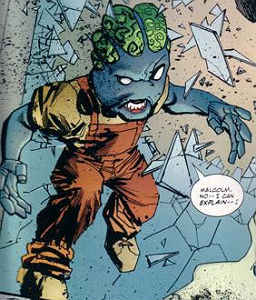 In early 1997, an invasion force from Mars began a mass assault upon the Earth in an effort to exterminate humanity before its superhuman population got too big and threatened their own planet. The Martians set up a headquarters on Earth that was in the city of Detroit, Michigan.

The Deadly Duo sought to infiltrate this facility set up within their hometown and they were joined by the sibling team of Liberty & Justice. The heroes were captured Liberty was taken away for experimentation. She was repeatedly raped by volunteers in an effort to impregnate the young woman. Her companions broke loose and rescued Liberty, taking her away to safety. The experiment was a success and Liberty was pregnant and her pro-life stance meant that she opted not to abort and carried the child to term. 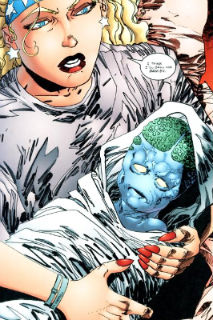 Months later, Liberty gave birth to a son whom she named Damien. This Martian-human hybrid was imbued with incredible intelligence. As soon as he was born, he was taken in by the Covenant of the Sword and was installed as their leader. He begun to work with versions of himself in different realities in a process dubbed Celestial Engineering. They planned for the safety of all Earths and exchanged information on how best to accomplish this extraordinary feat.

Damien had the Covenant gather up numerous super-powered offspring as well as summoning pregnant versions of their mothers from alternate timelines. They would serve as a superhuman army after the second Nega-Bomb was detonated, removing the powers of many freaks around the globe. Damien communicated with another version of himself and a plan was concocted to send Dragon’s mind to this mirror world where his unique experiences would enable him to save that Earth.

Meanwhile, the original Damien amassed more power by controlling the government’s Special Operations Strikeforce. He was witnessed murdering an official by Malcolm Dragon who proceeded to pummel the young villain into a coma. Damien’s mind was scanned by Debbie Harris who knew that Universo was coming to consume the planet. Without a Dragon to protect Earth, it was consumed and Damien presumably died along with the world. However, Damien DarkLord’s genius and forward planning does not rule out a later return for the villain.