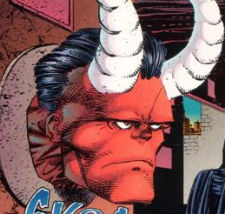 Back when the Dragon first emerged on the Chicago crime fighting scene, a television network saw an opportunity to exploit him. They devised a show about a freak cop from Chicago and selected one who became known as the Chicago Bull. The show was soon cancelled and the Chicago Bull found himself rejected by both normal humans and freaks. He went on a rampage in the Freak Outpost bar where he was killed by Weed and taken away to be made into meat for the ‘newcomer special’.