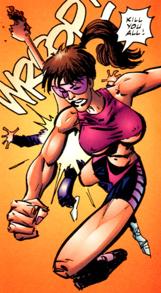 Name: Earth Girl
Real Name: Unknown
Former Aliases: N/A
First Appearance: Savage Dragon #53
Group Affiliations: Brute Force, The Special Operations Strikeforce
Height: Under 6′
Weight: Unknown
Eyes: Brown
Hair: Brown
Date of Birth: Unknown
Place of Birth: Unknown
Base of Operations: Chicago, Illinois
Other Distinguishing Features: Earth Girl sometimes has bits of dirt smeared around her mouth from her refueling
Marital Status: Unknown
Known Relatives: N/A
Powers: Earth Girl can channel energy from the planet by eating dirt. This absorption process enables her to activate her powers in either of two ways. She can possess limited super strength or fire concussive energy beams. Using either one of these abilities weakens Earth Girl, causing her to absorb more energy. It is unrevealed what the extent of the energy she can absorb at one time.

Earth Girl was one such new member and her first mission was to accompany a number of heroes in raiding Godworld to rescue those abducted by the God Squad. She then worked with Brute Force on other missions where the team struck up a friendship with the Deadly Duo and Vanguard. Brute Force were later folded into the Special Operations Strikeforce when they went through a membership change. She once again joins Brute Force.