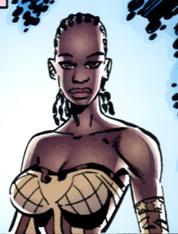 When several members of the Special Operations Strikeforce were either killed or proved useless in combat, Stephenson and Hawkins set about recruiting a number of new heroes. Lightning was one such recruit and after a period of training, she was soon added to the active roster. Lightning was then later transferred to the newly opened Chicago branch of the S.O.S. and was under Dragon’s leadership.

The Covenant of the Sword began abducting heroes to serve as their superhuman enforcers and Lightning was one of their victims. She was brain-washed by Damien DarkLord into becoming a loyal servant of his cause. Following the eventual defeat of the Covenant, Lightning was liberated and rejoined the S.O.S.