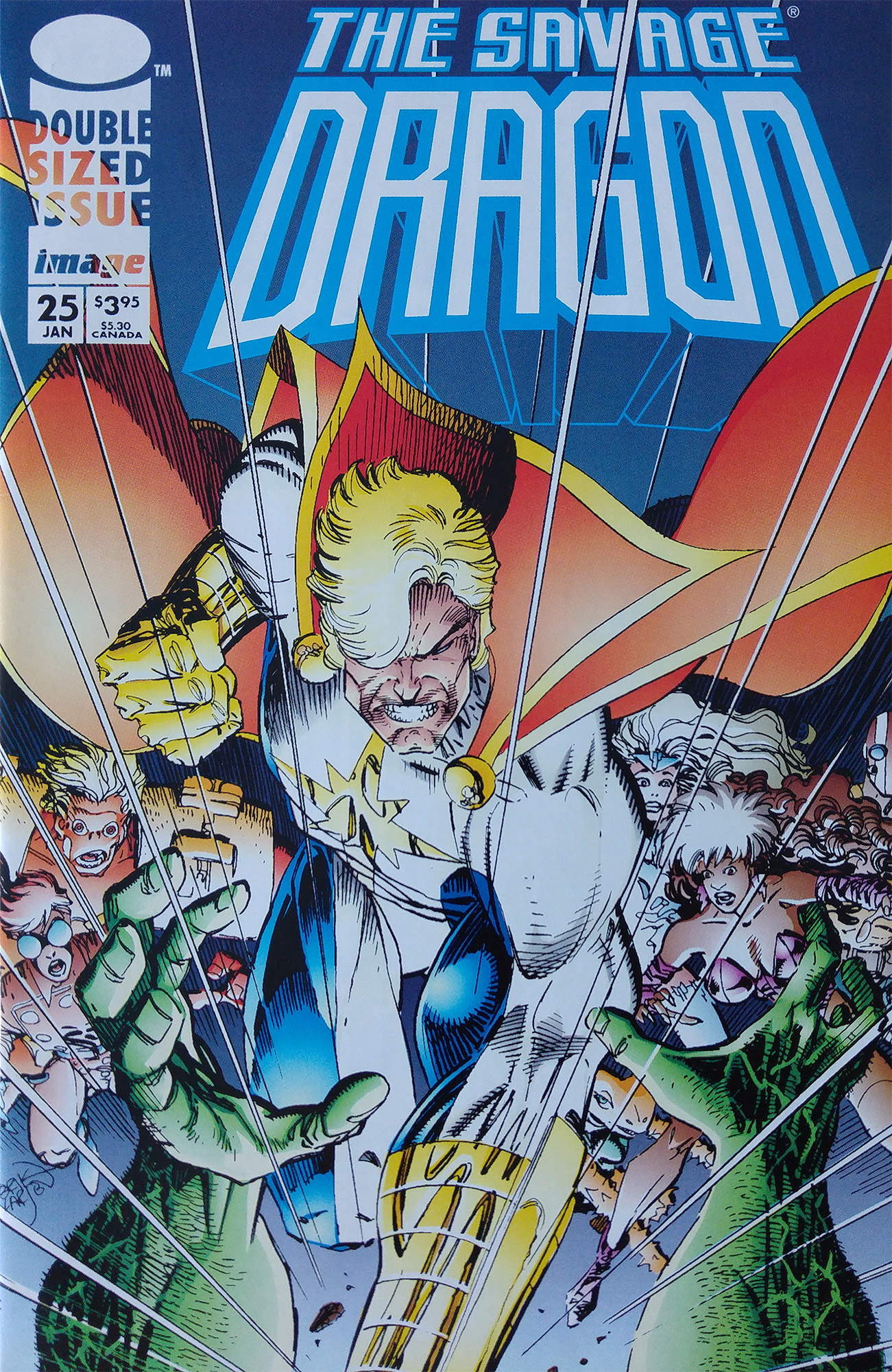 Dragon considers how the Fiend must be enjoying his current predicament after having left him in a crippled state. He wonders who is controlling the actions of Mighty Man who proceeds to pummel him repeatedly, leaving Dragon a bloodied mess once more. However, this had not been a malicious assault and Dr. Plucker thanks Mighty Man for breaking up Dragon’s bones so that he can lead a surgery team in repairing all of the damage done to his body.

Chester Droars had remained throughout the surgery but he feels out of place amongst Dragon’s friends and colleagues. He waits around long enough to learn that Dragon will make a full recovery before quietly making his exit. SuperPatriot opts to return to the streets of Chicago and is admired by both Rapture and Dart, thinking that were he a few decades younger that they would date him.

A drug addict is brought before “Johnny Redbeard” by She-Dragon as she believes that Charles Robinson could provide them with information regarding the Vicious Circle. The Inhabiter suggests that they uses Charles’s insider knowledge and convinces Chelsea Nirvana to use her powers to save him. She has a particular form in mind and imbues upon Charles a form that had previously been wasted on a psychopath, transforming him into a new Bludgeon.

Rapture arrives at Hillman Hospital where she pays a visit to Dragon who is now recovering in a bed. She states that once he is better then Dragon will come to live with her in the apartment that she shares with Horridus. Rapture then is asked to update Dragon on recent events, detailing how SuperPatriot believes that the Vicious Circle has now divided up into factions, meaning less open warfare in the Gang War conflict. The attempt by She-Dragon to get onto the police force by trying to impress Captain Mendosa but failing once Rapture defeated her. Mighty Man recently returned from California where he teamed up with WildStar. Peter Klaptin stopped by to see Rapture to discuss his secret revolving around Star and she suggests to Dragon that they cut Peter some slack.

BrainiApe again declares himself the new leader of the Vicious Circle but PowerHouse points out a number of reasons why no one will ever follow him. He details that BrainiApe’s personal hygiene is poor, he is too argumentative and belligerent, and he wishes to throw out OverLord’s entire infrastructure and start the Vicious Circle. The violence taking place is hurting super-freaks everywhere and BrainiApe leading would make things worse.

In his hospital room, Dragon is visited by Amanda Mills who is still determined to try and sleep with him as a means of thanking him for saving her life. Dragon comes up with a scheme to divert her attention and declares that it was Star that really prevented her death. Peter Klaptin accepts an invitation to meet with Dragon and the hero hints to Amanda that Peter was the man under the Star mask. Amanda gives Peter her address and instructs him to enter her apartment through a skylight. Later that night, Amanda is alerted to a crashing sound as Star falls over in her bathroom.

At the Freak Outpost, the Chicago Bull’s head has been put up on the wall as a trophy and his corpse is being served up as a burger called the “Newcomer Special.” Howard Niseman comes hurtling through a window after getting thrown by RoadBlock. Chris Robinson leaps into action to save his partner but he gets his head smashed into a wall. Howard is then led away to be locked up as the super-freaks discuss the possibility of serving him up as food.

Alex Wilde reveals that Phil Dirt survived his ordeal at the hands of Mako but he is missing some of his guts as well as a chunk from his right leg. Several new recruits had been called up but three of them have already gone missing in action. She informs Dragon that the city needs him and so he flexes his muscles to shatter his plaster and readies himself for action.

Meanwhile at Stronghold Penitentiary, one of the prison’s officials walks a visitor through the facility and details how their systems are all computerised. A security barrier suddenly activates and impales the official as one of the cell doors opens up. Arachnid is loose for the first time in years and seizes the opportunity to feast upon fresh meat, attacking the frightened visitor.

Dragon arms himself for action but as he gets set to leave the precinct, Captain Mendosa introduces himself to his super-powered officer. Until anything urgent comes up, Dragon is instructed by his new superior to remain in the precinct and deal with a huge mountain of paperwork.

Dragon grows increasingly frustrated with having to do paperwork instead of dealing with the Gang War occurring in Chicago. Alex Wilde stops by his desk to have some fun with him but their conversation is cut short when SuperPatriot enters into the precinct, covered in a huge amount of boogers. The hero cleans himself off as he explains to Dragon that a very specific sub-faction of the Vicious Circle has been assembled by CessPool. This group known as Body Function all share embarrassing superhuman abilities that have made them outcasts even among super-freaks.

The heroes are monitored from a nearby rooftop by Nasal Ned who reports in to CessPool and wonders if he should ambush them as they leave the precinct. CessPool angrily shuts up his minion, angry that he and Belcher broke their cover through stupidity, attacking SuperPatriot when he was merely buying a takeaway. CessPool makes it clear that Body Function is not to act again until he has given them all very specific instructions.

As Dragon and SuperPatriot depart the precinct, Nasal Ned accidentally bombards the area after sneezing. The heroes separate in order to surround the villain and intimidate him into surrendering without even making physical contact. Backfire had been purchasing donuts with Belcher and explained how he had been spying on Freak Force who reside in a rundown building. Nasal Ned’s shrieks had been heard by his teammates, causing Backfire to go up to check on him.

Backfire’s methane trail is set alight by SuperPatriot and the flames quickly catch up with the villain and cause an explosion. Belcher joins the fray with a massive explosive burp that devastates the rooftop where the battle had been taking place. Nasal Ned rejoins the fight but is swiftly taken out before Belcher’s mouth is blocked with a piece of debris before he too is knocked out.

With Body Function now in the custody of the Chicago Police Department, SuperPatriot asks if they should begin hunting for CessPool. Dragon shuts down the notion as he suspects that Body Function will give up their leader after only a brief interrogation. CessPool wakes up from a nap and tries to check in with his men but Dragon intercepts the radio transmission. The villain is confidant that he cannot be located, unaware that Dragon is stood just outside his hideout.