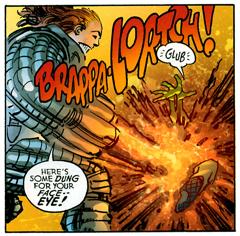 Name: Dung
Real Name: Unknown
Former Aliases: Mud (at least as far as the cartoon’s executives knew)
First Appearance: Savage Dragon #5
Death Issue: Savage Dragon #248
Cause of Death: Bleeds out through the arms after being negated.
Group Affiliations:The Annihilators, The Vicious Circle ,Superfreak Coalition of Chicago
Height: Around 6′
Weight: Unknown
Eyes: Brown
Hair: Brown
Date of Birth: Unknown
Place of Birth: Unknown
Base of Operations: Chicago, Illinois
Other Distinguishing Features: Dung does not have hands but rather a suit of armor that takes the place of his lost limbs
Marital Status: Unknown
Known Relatives: Blossom (daughter), Dumpling (daughter), Patty Same (mother)
Powers: Dung can transport feces from all over the world into his high-pressured suit of armor that can then be discharged as blasts of various power levels

Dung was one of the many freaks that were dissatisfied with the way that OverLord was running the Vicious Circle. He joined up with CyberFace’s rival faction, the Annihilators, and eventually assisted his him in claiming the leadership of the criminal organization. Dung remained with the group from that point onwards.

Throughout his years of service, Dung has taken part in numerous assaults on the behalf of the Vicious Circle. He aided in the defense of Chicago when the Martians invaded, fought at the White House when CyberFace was being deposed and was part of the superhuman army gathered by Mister Glum during his reign.

Dung is later seen at a Vicious Circle meeting where he exclaims that the word is out that OverLord is out to destroy the Vicious Circle due to the headlines from Gossip Rag. At this point in time Dung had aged considerably and now had a grey beard. It is soon discovered that Dung has two daughters named Blossom and Dumpling. They were not born through normal means as Dung created them to fill the void in his wife’s life as she was not able to produce children. However, his wife rejects them all and leaves them all behind.

He later bleeds to death when he is hit by the negation of Chicago causing him to bleed out through his arms.