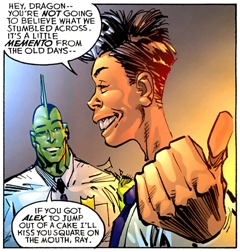 Ray Wong was one of the most likeable officers of the Chicago Police Department despite being more than a little nosey. He became friends with Dragon early on in the hero’s career and sought to help him out over the years with information. Ray provided him with a videotape that featured what looked like Rapture and Peter Klaptin seemingly about to have an affair. He also filmed Captain Mendosa speaking with Horde which exposed his corruption and replacement at the handas of Imposter.

Ray was still serving on the force when Dragon returned to active duty in 2009. When the OverLord armour was activated via remote control by members of the Vicious Circle, its photon blast was fired off and decimated the precinct, killing all of the human officers within.