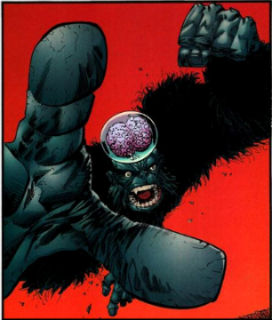 Name: BrainiApe
Real Name: Adolf Hitler
Former Aliases: N/A
First Appearance: Savage Dragon #23
Death Issue: Savage Dragon #137
Cause of Death: Incinerated by Solar Man
Group Affiliations: The Vicious Circle
Height: 6′ 3″
Weight: 480 lbs.
Eyes: Blue
Hair: N/A (has black fur)
Date of Birth: April 20, 1889
Place of Birth: Braunau-am-Inn, Austria
Base of Operations: Chicago, Illinois
Other Distinguishing Features: Well, BrainiApe is a gorilla with an exposed brain. It doesn’t get much more distinguished than that
Marital Status: N/A
Known Relatives: N/A
Powers: BrainiApe can increase the levels of gravity that are affecting people or objects. He can mentally control the bodies of people, leaving their minds unable to control what their bodies are doing. The brain can also communicate via telepathy and travel through telekinesis.

The history of Adolf Hitler is pretty much known to the world, even if that knowledge consists of ‘that guy is an evil bastard and should rot in Hell’. His origins are not entirely important to the origins of BrainiApe and can be found easy enough online or in books. What is important however is that the world believed Hitler to have committed suicide back in June 1945. This, however, was not the case and it was merely a double that was murdered so that the Fuhrer of Germany could escape to plan anew.

By 1952, Hitler was operating in secret within Romania and had begun to form the foundations of a new Nazi Party. Unfortunately for him, United States government operatives, led by paranormal investigator Hellboy, discovered his existence and shut him down. An explosion destroyed Hitler’s body but his brain was saved by scientists loyal to him who performed numerous chemical and radiation procedures upon their master in the hopes to make him mobile once more and able to lead them. The brain was soon able to function on it’s own using telepathy, telekinesis and miniature arms and legs.

To create greater mobility, the scientists placed the brain into a protective dome which was atop the body of a dangerous ape. This new creature remained in the care of the scientists until September 1966 where the now-amnesiac freak broke free and murdered all of his saviours. American entrepreneur Walter Williamson came across this curiosity and transported him back to the United States as a captive.

During August 1987, the freak escaped captivity and eventually made his way to Chicago where he joined the Vicious Circle as the thug known as BrainiApe. BrainiApe openly challenged the leaders of the criminal organisation, always believing himself more capable of ruling despite not fully understanding why he has such feelings.

Once CyberFace had managed to conquer Earth with alien technology, BrainiApe felt that he had no choice but to flee to a country relatively untouched by various invasions. He set himself up as prime minister of Australia, turning the authorities into brutal security forces that persecuted anyone that tried to employ technology, all of which had been outlawed along with electricity.

An alliance was then struck up with Dr. Verlag which provided the dictator with superpowered enforcers. This rule lasted until Dragon was found to have arrived in the country and the hero was soon thrown into the Arena of Death, a gladiatorial venue designed to entertain the masses. Dragon broke free and liberated the M.M.M.S. slavecamp, effectively ending BrainiApe’s rule.

BrainiApe was taken prisoner by Dragon aboard one of the flying saucers and was left to die in this alien vessel once its self-destruct mechanism was activated. BrainiApe was assumed killed but instead his brain was recovered by his ever-loyal follower, Baron Blitzkrieg who fitted him with a new body. He revelled in this new robotic body and led his long-hidden army into battle. The Liberty League were successful in not only dismantling this army but also defeating BrainiApe himself.

Some time later, Mister Glum sought out a pawn to use to destroy or secure a device that would have enabled Dragon to open a portal into the realm where his homeworld exists, Dimension-X. BrainiApe was chosen and ended up fighting Dragon, Madman and the Amazing Joy Buzzards. The villain would have killed his opponents had he himself not been blasted by the heat vision of Solar Man, becoming the latest victim of the merciless superhero’s war on crime.

TALES OF THE BULLY PULPIT
1 (Mentioned only, but what the heck?)

SUPER FREAKS
One-shot (not in continuity)