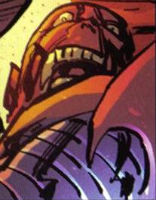 During the Gang War fought between rival factions within the Vicious Circle, the Chicago Bull carried out an attack upon the Freak Outpost bar, upset to have been rejected by his fellow freaks. Hazard was the villain sat drinking with Weed as the plant-man killed the disgraced, fallen television star. Many years later, Hazard was one of Virus’s victims as he massacred a whole host of Vicious Circle members.