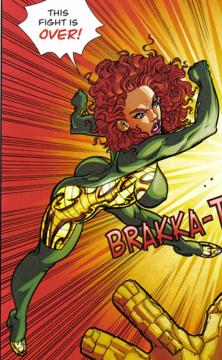 Chelsea Nirvana was the unwanted daughter of Dr. Nirvana, the nemesis to the original Mighty Man. He had always wanted a male for an heir, as evidenced by what he later did to his child. Due to this rejection, Chelsea became extremely bitter and when her father was left comatose while awakening Rapture’s superhuman powers, she decided to prove herself his better by finally destroying Mighty Man for good.

Freak Force had only been active for a few months and was advertising for a secretary. Chelsea was the only applicant that was not scared away by the various members of the team and she was hired. Information was gathered about the heroes and she discovered the nature and origins of Mighty Man. She eventually met up with the Inhabiter and the pair soon became lovers and plotted their own mutual revenge plans on Freak Force.

Chelsea and the Inhabiter’s plans finally came together when they encountered Johnny Redbeard and had his powers recreated into Chelsea. She became an incredibly attractive woman but soon realized she was slowly becoming identical to Johnny Redbeard. Chelsea created the Henchmen and led them with Inhabiter to temporarily join forces with Freak Force so that they could liberate the MMMS camp and gather an army of freaks to later further their goals.

Soon after, the Gang War tore through Chicago as freak factions fought for control of the Vicious Circle now that OverLord was deceased. The new Johnny Redbeard further added to his/her ranks by creating a new Bludgeon but not even his might was enough to defeat CyberFace’s group. Negate was then used to remove Chelsea’s powers but oddly enough, she reverted back to a male form.

Chelsea Nirvana was released from police custody as no criminal charges were attached to her name and she left in her new body of a younger version of her father. With the Inhabiter once more, Chelsea sought to finally rid herself of Dr. Nirvana and injected him with Solution X, which was supposed to be an untraceable poison. The pair then left to develop further plans.

Months later, Chelsea Nirvana and Inhabiter formed the Frightening Force to finally crush Freak Force, and a number of powerful members were added to the group. Unfortunately, their plans were foiled when Joey Finkleberry was used to defeat the entire group. Chelsea was confronted by the returned Dr. Nirvana, who designed Solution X to cure him if he ever fell ill from anything. He then revealed the true reason why he desired a son, by transferring his mind with that of his daughter, taking her male form as his own

Chelsea Nirvana was left alone and soon fell ill as she was in such an old and frail body. She located an image inducer designed by her father and used it to murder Amanda Love to keep Dragon away while she then killed Mighty Man and stole Ann’s powers. As the third Mighty Man, Chelsea attempted to seize control of the Vicious Circle but was possessed by the last Wicked Worm. She was left starving to death while trapped in the powered form and even when the leech was removed by Dragon, Chelsea opted to continue fighting. This weakened her enough for a final blow to finish her off, with her powers then being taken by Dart.

During his travelling between worlds, Dragon arrived in his own past and created an all-new timeline when he killed Chelsea Nirvana before she could murder Ann Stevens. This allowed her father to complete his plans regarding the use of Absorbanoids. Dr. Nirvana was then killed in an explosion caused by a battle involving Dragon, Mighty Man, the Demon Dogs and his own Absorbanoids.

In the reality that Dragon finally ended up on for good, Chelsea Nirvana still gained the abilities of the Creator. She was recruited by the government to work with young freaks whilst also serving as their agent, defeating such villains as Rushmore for them. Chelsea enjoys working with inexperienced young freaks and seems to have abandoned her quest to prove herself better than her father.