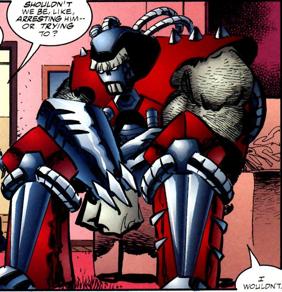 Charles Robinson was a low-level employee of the Vicious Circle, or a “fleshie” as the human members were referred to. He was responsible for bringing his brother Chris into the fold but after drug addiction engulfed Charles’s life, Chris left the crime behind and hoped that his sibling would eventually pull himself together.

During the Gang War, Chelsea Nirvana posed as Johnny Redbeard and assembled an army of freaks in preparation for battle with CyberFace. Chelsea gained information on the Vicious Circle through Charles and rewarded him by transforming him into a new Bludgeon, curing his drug addiction by making him one of the most powerful superhumans on the planet.

Bludgeon remained loyal to Chelsea Nirvana even after her bid for power failed and served her on the Frightening Force. He then went on to join the Vicious Circle as minion of Horde but once that villain was defeated, Bludgeon moved away from crime. Bludgeon became friends with She-Dragon, leading to the behemoth to fall in love with her, a feeling not reciprocated by the oblivious heroine.

In a desperate attempt to be happy, Bludgeon agreed to work for the Dark-Landers after being romanced by the Darkworld version of She-Dragon. These villains were eventually defeated and Bludgeon opted to have his old teammate Negate remove his powers. This attempt to move away from crime had an unfortunate result though, as Charles ended up passing away through complications created by his past drug abuse.