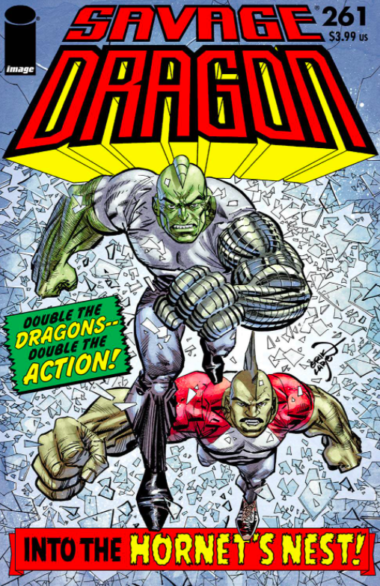 Despite Mako II eating a guy, some dumb kid drags his dad over to see him, mistaking Mako for a movie shark he saw. Mako tears the two in half. Malcolm and Maxine take in a hockey game. Roughneck breaks into Dart’s former lair and confronts Insect. He slaps aside Billy Summers but Samurai kicks him through a window and he plunges to the street below. Maxine gets plastered and she’s unconscious when Malcolm arrives how where Paul and Alex Dragon have been babysitting.

Mako II confronts Roughneck. He wants to know the location of the Vicious Circle and he ends up consuming Roughneck’s legs and roasting him over a flame to get him to talk.

Angel Murphy is moving out now that Paul and Alex have married. She stays one last night and promises to leave the next morning.

The three oldest Dragon kids get vaccinated as a publicity stunt to encourage getting kids vaccinated. Because they’re superpowered, they need to be injected in their tongues but the images are so disturbing, they’re not able to use them.

Malcolm’s half-sister Marsha Bradley calls to ask if Malcolm could give her some blood so that they can resuscitate Horridus who is dying from Covid-19. Malcolm can’t believe they’re not vaccinated and tries to talk sense into his younger sibling. Malcolm agrees to provide the blood and arranges to give a vial to Angel Murphy who is moving down to the States and getting ready to leave. She agrees to deliver the vial of blood to Horridus.

Meanwhile, some unknown person has tipped off Paul Dragon about a Vicious Circle meeting and asks Malcolm to join him to round up the remaining few members of that once-formidable criminal organization. Arming himself with a power glove, Paul and Malcolm prepare to crash the event.

The Vicious Circle meeting does not go as Samurai had hoped. She thought that as Dart’s second-in-command that she could simply assume the leadership role but various others vie for the top spot. Bile attacks her and is easily thwarted, followed by Death-Gaze and Split-Head who are similarly felled. When a wall comes tumbling down, Malcolm and Paul Dragon are somewhat shocked to find that the remaining Vicious Circle members are still formidable. They’re quickly surrounded and attacked by the assembles villains.

The Possum
The Dragon
Luna

Valentine’s Day. Brooklyn’s first superhero Luna is in the midst of a brawl as Red Hook and Dragon arrive. Threatened by Comedy & Tragedy wielding a bow and arrow being fired from a balloon, Malcolm hurls a syringe through their balloon, toppling them. Red Hook grabs the arrow before it can hit Luna and presents it to her as a gift. Luna does some kind of magic spell to Dragon’s blood which allows the Mannequin to bring life to the wax form of Catherine. Dragon is sent home and Red Hook and the Possum enjoy chocolates on the river.