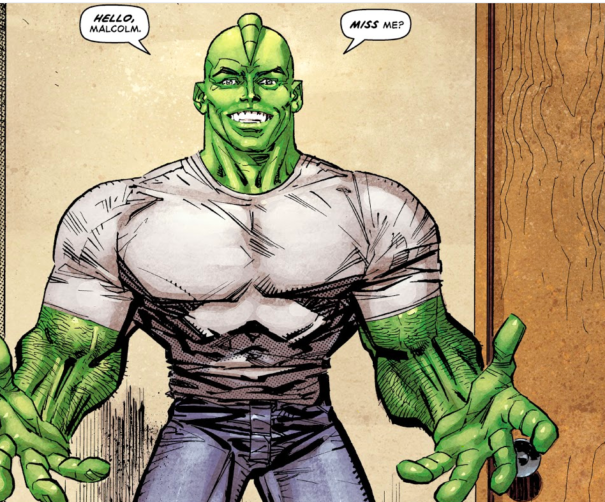 According to Paul Dragon, he came into consciousness when he was merged with William Jonson. William could change into the Dragon and when he did he donned a cape and cowl to hide his identity. The Dragon fathered two children, Mark and Peter Jonson, who became the heroes the Crusader and the Destroyer. At first William’s persona was the guiding one in his Dragon identity but over time, Paul Dragon gradually asserted his personality. After several years of adventures, Paul gradually took over, turning back to William infrequently.

Desperate to take control of his own life, William sought out the wizard Fon~Ti, who used his powers to separate the two. William was given a new Dragon identity, which was he controlled and Paul Dragon became his own being. Paul Dragon had a child named Angel out of wedlock with his girlfriend Susan Wilson. Paul and Susan were to be married but Sue was killed by the villain Bronze Man at their wedding, after which Paul retired from the S.O.S. to raise their daughter.

Paul Dragon is a Dragon from a different timeline. Paul Dragon went into Dimension-X in a desperate attempt to find an alternate reality version of his slain wife. After the Merging of Multiple Worlds, Paul was given the shared memories of the Dragon from every alternate timeline. Paul Dragon appeared in the current Savage Dragon continuity when he showed up at Malcolm Dragon‘s door out of the blue. Paul ends up making new friendships with a lot of people in his new universe and begins a relationship with Alex.  When a new Mako shows up, he believes it to be his version, but it’s not and the new Mako bites his arm off.

He later marries Alex Wilde in a beach front wedding.