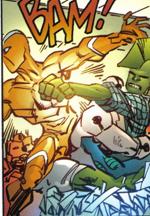 Golden Rod was one of the many new freaks to join the Vicious Circle under Buster Justice’s rule. He took part in a raid ordered by OverLord III to steal a unit of Dragon’s blood from Hillman Hospital. After a brief clash with Dragon’s children, the blood was successfully taken, leading to the creation of the Dragon Army. They later die during a large scale battle where the building they are in collapses on them.