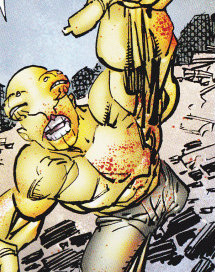 When OverLord is surveying the massacre of the Vicious Circle at the hands of the Tyrrus Combine, Hell Eyes throws a rock that hits OverLord in the head. Hell Eyes blames the slaughter on OverLord and while it appears that OverLord is going to kill Hell Eyes, he decides to spare him. Hell Eyes then flees the scene.  He later dies in a battle with Mako II when he’s hit by Volcanic’s mouth blast.