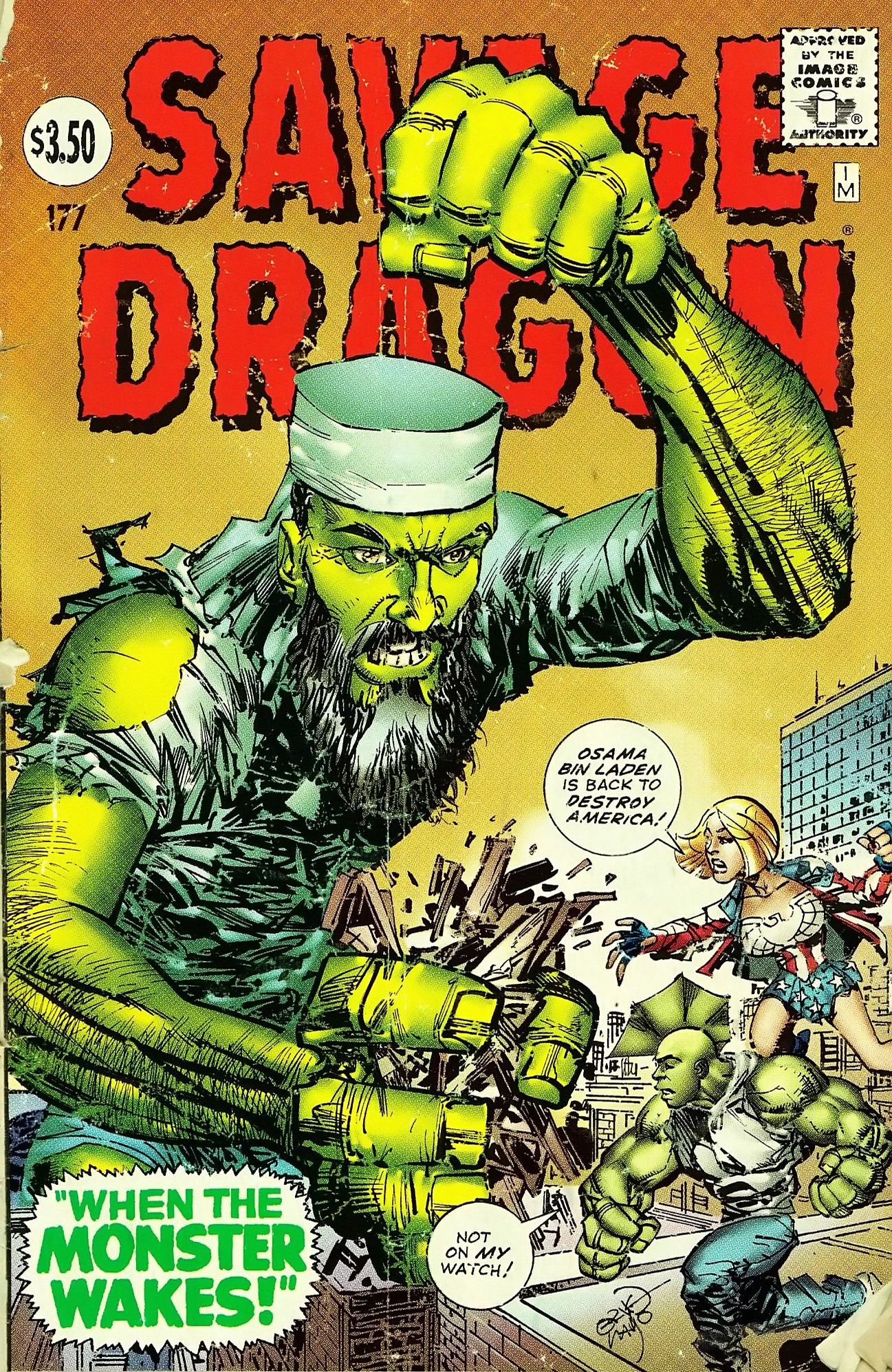 When The Monster Wakes
December 2011
20 Pages

Some time ago, Osama Bin Laden was killed during a covert military operation involving the Navy Seals. His corpse was buried at sea after being cast overboard from the USS Carl Vinson and drifted down towards the ocean floor. However, the body never reached its intended destination as the Lava Lords carried out a raid upon the surface world. This stirred up the currents and Bin Laden drifted off course until it got caught up in Pacific Ocean tsunamis. The radioactive material that leaked into the ocean from a Japanese meltdown irradiated the water and affected the corpse of the world’s most infamous terrorist. Bin Laden rises from the ocean in a mutated, giant form and momentarily attacks Japan before returning to the depths and heading elsewhere.

Dragon appears in a holographic image before his estranged children and fills them in on his resurrection at the hands of DarkLord. He talks about how he is back living with his own race, the Krylans, and is helping them search for a new planet to call home. Dragon reveals all about his true origins and how the man that was known as Emperor Kurr became the man he is now. Malcolm and Angel ask for their father to return home but he suspects that he should remain away from Earth for now. His previous persona caused a great deal of chaos and Dragon knows that it will take time for him to be greeted back home.

The fact that he has not seen his kids in a few years distresses Dragon as he cannot believe how much they have grown up. Malcolm has filled out a great deal and Angel looks more like her mother than ever before. Dragon apologizes for missing their birthdays and graduation up into high school. Malcolm reveals how Angel has slept with Frank but Dragon simply advises his step-daughter to use protection to avoid parenthood at a young age.

Malcolm and Angel take a flight to New York City for a scheduled appearance on The Jerry Rivers Show to talk about the recent events in their lives. Angel takes this opportunity to confront her brother over telling Dragon about her relationship with Frank. He wonders what Mildred Darling would think if she found out but that is something that no one really wants to happen. Angel asks about Malcolm’s relationship with Tierra Jones but the young hero claims that he has never even spoken to his girlfriend about sleeping together.

Over at Hillman Hospital, a medical exam upon Pee Wee is completed by Larry Bradford who confirms that the youngster has not aged a single day since he emerged from suspended animation. It seems that this is also the case with the rest of the Little Wise Guys and even Daredevil. Larry suspects that the cosmic nature of some of Solar Man’s other prisoners have affected them all and caused them to no longer age. Peewee is alarmed by this revelation and worries that the reason “blood brothers” ceremony with P.J. has similarly affected his newest teammate and brother.

The Dragon kids take a taxi over towards the television studio where they talk about the complicated nature of their relationship. They are not related in any way but the connection of their parents has caused them to think of themselves as siblings. Malcolm believes that this is a similar relationship as they all have with Frank now that they live together but Angel dismisses such a notion. The taxi is caught up in heavy traffic which they are alarmed to discover is being caused by the arrival of the gigantic Osama Bin Laden.

Malcolm Dragon and Battle Girl charge to confront this menace but Malcolm is immediately batted aside and is sent flying across the city. The hero races back to the scene to deliver one of his patented lightning punches before Battle Girl throws a vehicle at Bin Laden. She is picked up by the villain and is about to be crushed when Malcolm intercepts. The kids fall to relative safety which allows the Army to move in and open fire. These attacks prove to be completely ineffective and a new plan is needed.

As he once wrote a report Bin Laden, Malcolm is looked to regarding formulating the plan and he comes up with a surprising idea. He notes that Bin Laden had been obsessed with the music of Whitney Houston and has the Army fly a helicopter in front of the terrorist, playing a Houston song at a loud volume. Bin Laden pursues the aircraft out into the Hudson River which allows the Air Force to open fire with significant firepower, finally killing the villain for good. Angel feels guilty celebrating the death of someone but Malcolm is quick to point out that Bin Laden was not a good man and he deserved what he got.

With the danger out of the way, Malcolm and Angel are finally able to attend the talk show. Jerry Rivers is told about how the military were the real heroes in defeating Osama Bin Laden and they are just relieved that they stopped the villain before any real damage was caused. The heroes are not sure what will come next for them but until then, high school will keep them busy and they are ready to for action whenever the next threat arises. Little do Malcolm and Angel know, spaceships belonging to the fearsome alien Tyrrus Combine are approaching Earth… 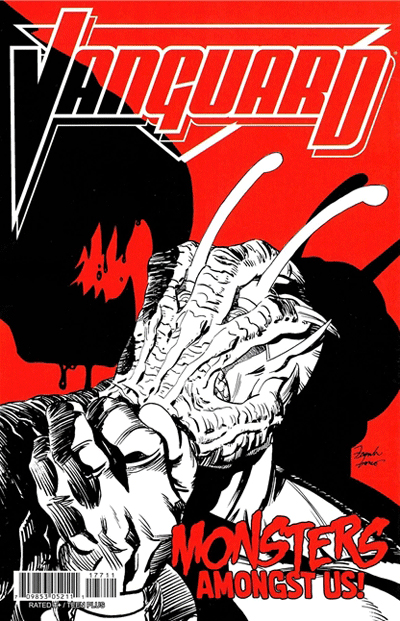 A funeral service is held for Kazi where Vanguard also mourns the loss of almost his entire race. Out of the thirty million Kalyptans that had been alive, only a mere handful still survives throughout the entire universe. Vanguard laments over the fact that Kazi died in a vain attempt to prevent him from returning home, something that he had no intention of doing. The method that the Tyrrus Combine won the war is then discussed in more detail.

It seems that although the Kalyptans had kept their enemies on the ropes for the best part of twenty years, they still managed to lose the conflict. The Tyrrus Combine had discovered the means of negating all of the Kalyptans’ technology which enabled them to use their superior physical abilities to exterminate their foes. One of the cadets awakens and introduces himself to Vanguard as Lt. Barakkus. He is eager to return home to aid their dying people but Vanguard is unwilling to face almost certain death until they figure out a means to keep their technology working against the Tyrraneans.

Wally suddenly discovers that their ship is broadcasting their coordinates and that all of the technology aboard has been compromised. The Tyrranean commander had managed to teleport aboard the ship with his cybernetic minion who has now taken control of the vessel. With their combat suits deactivated, Vanguard and Barakkus fall quickly to the Tyrranean but when he makes contact with Lurch, the Morphling transforms into the fearsome creature’s form.

As the two Tyrraneans battle it out together, Roxanne Wells makes off to retrieve the last remaining power glove and uses it to destroy the cybernetic underling. Wally had been about to restore Stacy Swan into her Modem form to deal with this threat but with the immediate danger over, he leaves Stacy in her cell instead. With their technology working again, Vanguard and Barakkus are able to overpower their Tyrranean foe and ultimately kill him. The danger appears to be over but several more Tyrrus Combine spaceships appear. They send a message simply asking if they all wish to surrender… or die…