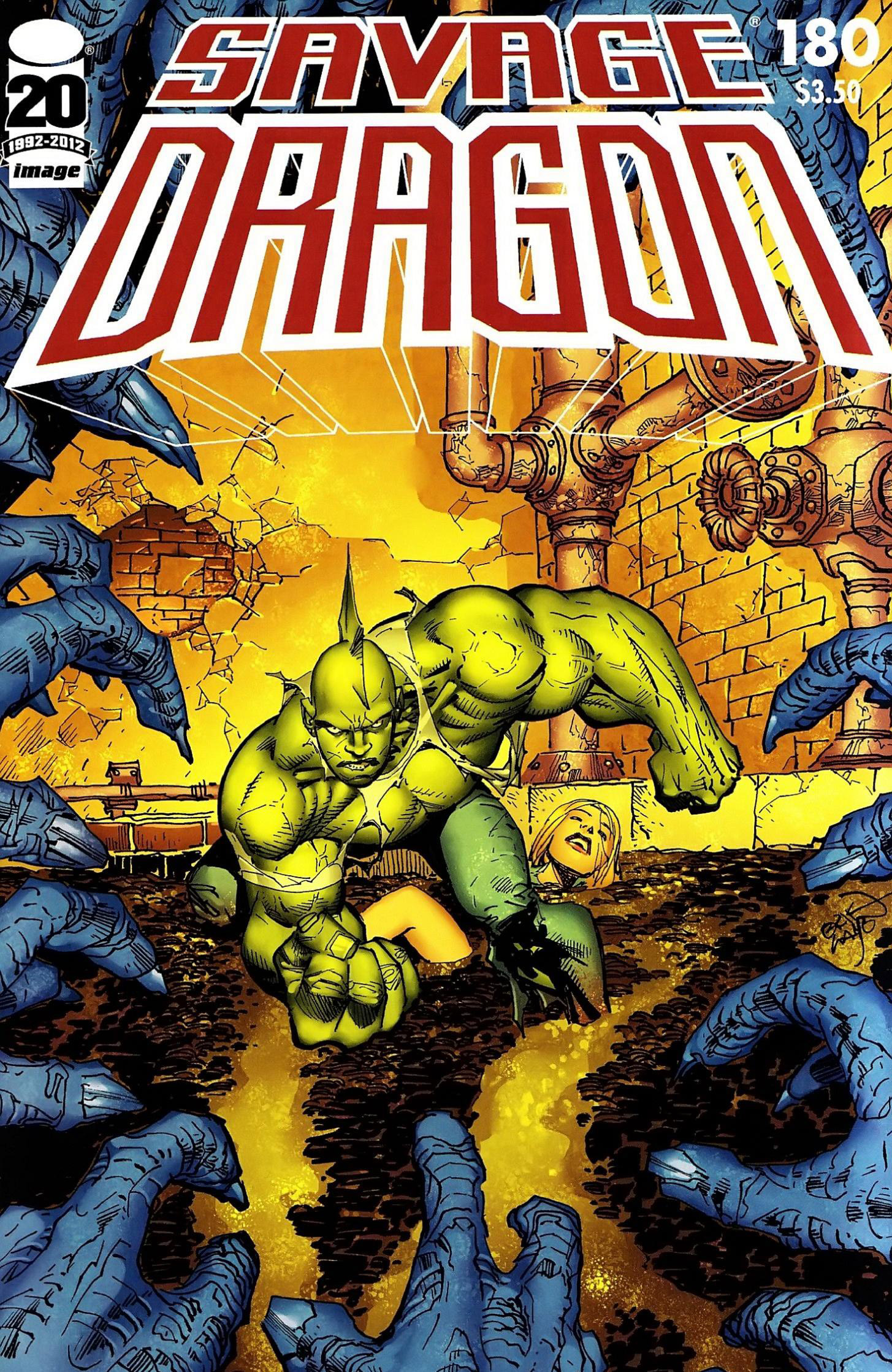 Erik Larsen: Story & Art
Tom Orzechowski: Letters
Nikos Koutsis: Colors
Mike Toris: Flats
Josh Eichorn: A monkey wearing a tuxedo made out of bacon riding a cyborg unicorn with a light saber for a horn on the tip of a space shuttle closing in on Mars while engulfed in flames.

Dragon orders his people to exterminate the entire Tyrrus Combine that now inhabit the conquered planet of Kalyptus. Emperor Krull questions his father over the genocide of an entire species. He points out that taking even a single life is against the Krylans’ law and religion but this does not affect Dragon’s decision. Dragon is upset that he is too far away to deal with the invasion of Earth but he can ensure that the Tyrraneans cannot carry out other such attacks in the future, avenging the fates of both Earth and Kalyptus.

Malcolm Dragon is taken aback by his step-sister’s request to sleep with her before they are inevitably killed. Battle Girl defends her actions by declaring that not only is Frank Darling already dead but they are doomed too. They barely defeated a single Tyrranean and there are possibly millions of them currently annihilating humanity across the planet. Malcolm refuses to simply accept defeat and instead suggests that they seek out Rex Dexter’s assistance. He hopes that the genius intellect of their ally will somehow enable them to claim a victory. They pass the young Mighty Man as the hero fights numerous aliens. Malcolm and Angel then witness the Dreadheads join the fray as the robotic minions of Dread Knight engage the Tyrraneans.

The Gods have suffered heavy casualties at the hands of the Tyrrus Combine, the savage aliens managing to tear through their ranks just as easily as they have ordinary mortals. Herakles is alarmed by the might of his opponents but is pleased to have Thor at his side. The Thunder God is fighting alongside his long-time rival for the first time in too long, still blinded from his encounter with Emperor Kurr. The duo stands atop numerous fallen Gods as they fend off the advances of their invaders.

The ranks of the Vicious Circle have been depleted as well over a dozen of the villains lie dead on the ground. OverLord stands on top of his fallen allies as he continues to blast away at the Tyrraneans as they swarm toward him.

An army of the gigantic Grokk sea monsters emerge from the oceans and begin engaging the Tyrranean space vessels directly. As casualties are suffered on both sides, the Atlantean armies join the fray, led into battle by Mako. The super-freak is questioned about their participation in this war as King Garf hadpreviously rejected the notion. Mako claims to have come to an understanding with the king but actually killed the monarch and simply seized control of the army.

As numerous other heroes fight to repel the alien invaders, SuperPatriot blasts his way out from underneath a pile of attacking Tyrraneans. He regains his freedom as the deceased members of the Special Operations Strikeforce lay lifeless on the ground. The veteran superhero loses his cool and opens fire and is determined to end this threat.

Malcolm and Angel arrive at the underground laboratory of Rex Dexter where they catch him having sex with Horridus. The kids are alarmed that Rex has seemingly given up on fighting the aliens but are advised to enjoy what few moments of life that remain. They begin to grow desperate and Angel wishes they could somehow contact God, knowing that Dragon once encountered him. Malcolm dismisses the notion of there being a real God but this discussion inspires Rex and he conceives of an idea.

Zeek and the semi-retired Red Giant and Star battle valiantly against the Tyrraneans but to no avail. The military do their best and the Vicious Circle continue to suffer losses but it looks to be completely hopeless. The Tyrrus Combine appears to be heading towards total victory when suddenly AllGod appears out of nowhere. He declares that this conflict is over before proceeding to eradicate almost the entire invading army.

This effort leaves AllGod badly depleted and, not knowing if he is really friend or foe, the military open fire on this deity. AllGod is blown apart by the onslaught and dies right before Malcolm and Angel’s eyes. They had figured out that Rex had somehow been able to contact the Gods’ primary ruler and gain his assistance. The surviving aliens flee the planet but Vanguard and his allies notice this retreat. Vanguard commands that they kill every single last one of the Tyrraneans as punishment for exterminating his own people.

Meanwhile on Kalyptus, Dragon bears witness to the red mist plague laying waste to the Tyrrus Combine inhabiting the planet. He celebrates their defeat and notes that the Krylans will now simply have to wait for the mist to dissipate before taking this world as their own. Emperor Krull approaches his father and declares that he had hoped Dragon was no longer anything like his original Emperor Kurr persona. This act has convinced him otherwise and for the good of his people, Krull challenges Dragon to a blood match that will see his father killed as a result… 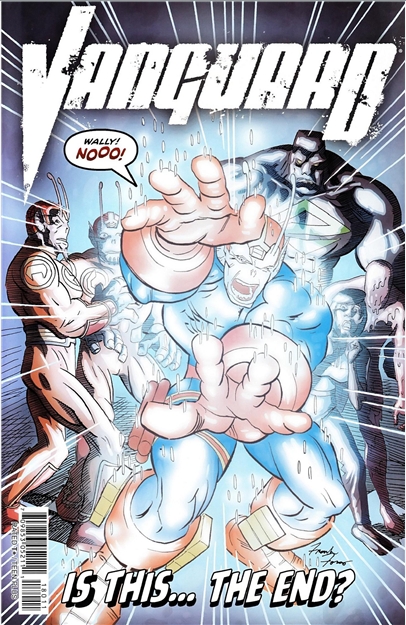 The sheer numbers of the Tyrraneans soon overwhelm even the spaceship headquarters of Vanguard, the army of aliens breaching their hull. Vanguard suggests that they all flee down to the surface and resume the fight there. Barakkus objects as he does not understand how they can possibly do better fighting hand-to-hand than they are aboard a fully-armed battle-ship. Their disagreement is interrupted when Wally enters the room, still attached to the Mekka-Drone body.

Wally declares that he now serves the Mekka-Drones who have all arrived to join forces. Together they will overthrow both the Tyrrus Combine and Kalyptans, allowing them to rule the galaxy themselves. Barakkus charges him down but is seemingly incinerated before the rest of his former friends. Vanguard is soon left alone but as he attacks his apparently traitorous best friend, he too vanishes. He is shocked to discover that he has actually been teleported away with his allies aboard a now empty Tyrranean vessel.

Roxanne Wells notes that they have all in fact been saved by Wally who had discovered that the Mekka-Drones were infecting Vanguard’s ship like a computer virus. Wally had created a ruse so that he could get his friends to safety before taking action. The robotic hero activates his ship’s self-destruct mechanism and sacrifices himself to exterminate all of the Mekka-Drones, taking out over half of the Tyrranean fleet still in orbit.

It is suggested by Barakkus that they now abandon Earth and escape but Vanguard refuses to allow Wally’s sacrifice to be exploited like that. He instead instructs Thramm to pilot their captured Tyrranean ship and then assists him in opening fire upon the other alien spacecrafts. Roxanne notices that the remaining aliens on Earth are fleeing from what is being reported as an act of God. Vanguard orders that there be no survivors and the group attack without mercy. Lurch takes on the form of Amok and joins him in physically tearing apart Combine ships. As the heroes finish off their extermination mission, Vanguard begins to mourn the loss of Wally.